The United States Holocaust Museum has just released “Crisis in Darfur” an online mapping project together with Google Earth. If you zoom in on Africa, you will find a lot of flames that may be clicked for more information.

In 2004 the U.S. Holocaust Memorial Museum declared a genocide emergency for Darfur, Sudan. To date about 2,500,000 civilians, targeted because of their ethnic or racial identity, have been driven from their homes, more than 300,000 people killed, and more than 1,600 villages destroyed by Sudanese government soldiers and government-backed militias, known as the “Janjaweed.” More than 200,000 Sudanese are refugees in neighboring Chad. The crisis continues as thousands more die each month from the effects of inadequate food, water, health care, and shelter in a harsh desert environment. 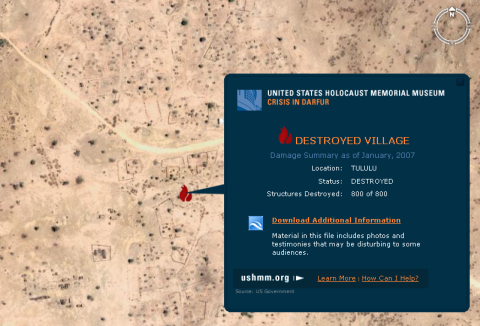 Where next? Visit the new journal Conflict and Health or my earlier blog on epidemiology in wartime. More on Africa: African studies repository paper in firstmonday.

Related posts: Another layer of complexity in gene regulation |