The fate of an individual cell in the human body is a mystery. A new Nature paper now provides a follow up of single cells of the epithelial cell layer. It is certainly a paper that will rank among the top 10 this year, although I have difficulties in understanding the setup. To track the cells, the authors use endogenous flurorescent staining that can be switched on by injecting multiple doses of tamoxifen.

Animals transgenic for the tamoxifen-regulated mutant of cre recombinase (AhcreERT), expressed from the inducible CYP1A1 promoter, were crossed onto the R26EYFP/EYFP reporter strain, in which a conditional allele of enhanced yellow fluorescent protein (EYFP) is targeted to the Rosa26 locus (Supplementary Fig. S1a; refs 16, 17). In the resultant AhcreERT R26EYFP/wt heterozygotes, EYFP is expressed in a dose-dependent manner following transient expression of cre induced by a treatment with betaNF and tamoxifen at 6â€“9 weeks of age.

I am not quite sure where the experiment is starting off. Later on in this paper the authors write about “stem cells” while the title is about “progenitors” which may be a huge difference.
I also do not understand why these colored cells appear only in a frequency of 1 to 600 as 8% at a given time point may be dividing “progenitors” according to Fig. 4B.
The authors challenge the current stem cell / transit amplifying hypothesis where the basal layer clone needs to be a time-independent proliferative unit.

Faced with this apparent contradiction, one could attempt to revise the stem cell/TA cell model, but staying within the general paradigm. This might include introducing the capacity for stem-cell ageing and/or migration. Alternatively, one could try to exploit the range of experimental data to seek evidence for a new paradigm […] Here we argue that the clone fate data are compatible with a model in which IFE [interfollicular epidermis] is maintained by only one compartment of proliferating cells.

Why is stem cell ageing not an equal likely explanation? Getting more insight where cells come from and where they go, remains a fascinating challenge.
scienceblog:doi:10.1038/nature05574 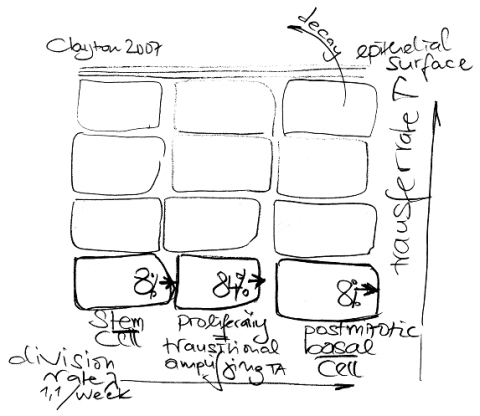 Related posts: (Re)programming adult into pluripotent cells | Divide and conquer | Another difference between men and women | Genes wanted | Some are hybrids, some are not |