I spent a lot of time in libraries verifying bibliographic lists as I expected that somebody else could have had the idea of allergy induction by vitamin D before — in particular when being closer to the introduction of vitamin D supplements. Fortunately Science Magazine now offers a fulltext search of their archives (what is currently not possible with old Nature volumes). I could locate about 70% of the computer hits when searching manually the Science index for vitamin and hayfever. The loss of about one third could be mainly attributed to the fact that extra supplement pages have only occasionally preserved in the libraries that I have visited for this project (Marburg, Berlin, München STABI + TUM, Garching). Text recognition is also limited, so my results may be preliminary.

What I found this afternoon in the library at TUM Garching is “Science” volume 134 by 8/12/1961 that contains a paper on page 1876-1877 that seems to be the ancestor of the allergy vitamin hypothesis. The title is “Cutaneous molt induced by calciphylaxis in the rat” and authors are Selye, Gentile and Prioreschi. An accompanying commentary appeared about 6 months later by Marshall Urist about “Induced systemic hypersensitivity” (Science 1962;137:120) that covers also the book “Calciphylaxis” by Selye. 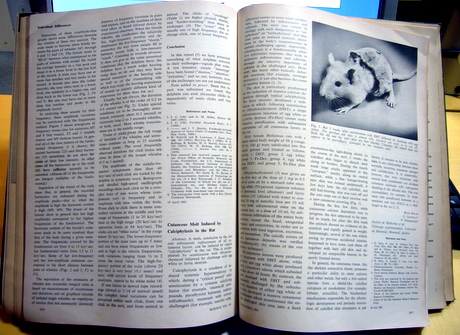 Hans Selye was an outstanding scientist. Born 26/1/1907 in Vienna, he died 16/10/1982 in Montreal as the founder of a new field of stress and adaptation research. He holded a M.D., Ph.D., D.Sc. and 43 honorary doctorates (for photos of Selye see stress.org)

“Calciphylaxis” is somewhat different from a generalized anaphylactic reaction but there are some key points that point towards an allergic reaction (IgE was discovered only 5 years later and it took eve more time to discover the immune function of vitamin D). What Selye describes here is a sensitization assay with dihydrotachysterol (a synthetic vitamin D analogue) and multiple injections of egg white (a strong allergen) in a total sample of 60 rats. Treated animals developed “a massive cutaneous calcification” with painful skin; the editorial describes it even better as a “condition of induced systemic hypersensitivity” with calcium depleting “the granules of mast cells”. The effect is

apparently to produce a milky extracellular fluid saturated with calcium phospate salts … is inhibited by by adrenocorticotropin, gluccorticoids … The claim in the discovery of calciphylaxis is that a single oral dose of dihydrotacysterol, too small to produce nonspecific calcification in tissue, consistently sensitizes the animal for typical calciphylactic responses … The investigators who repeat Selyes’s laboratory work will raise this question about the major premise of calciphylaxis: Is it an allergic or hypersensitive state (a manifestation of altered responsiveness dependent upon a sensitizer and a challenging agent) or is it better defined by some other concept?

The answer to this question was only apparent in 2003 (lung), or 2004 (also lung) and in 2006 (skin). The focus on the calcium effects which is otherwise not so far away from the allergic response probably prevented the final formulation of the hypothesis. Such a hypothesis would have even been extremely difficult to prove, as IgE was not known at that time.

Interestingly, the concept of calciphylaxis then moved into a different direction – it describes today the necrotic skin ulcerations in dialysis patients. The modern term would be most adequately be described with “calcific uremic arteriopathy” with only a few patients described so far in two case control studies by Fine and Mazhar. Latest news may be found at a new registry for this disease. 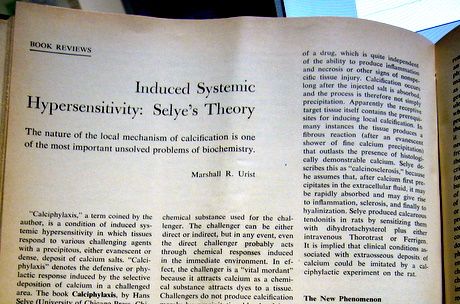