Looking at the original paper it appears that this

this was a retrospective, observational study with a selected population, introducing possible selection bias. The study population was derived from patients who had had their vitamin D levels measured at a hospital laboratory and who were patients in a cardiovascular practice and included in its electronic medical records. Extrapolation to other populations might not be appropriate. Also, isolated vitamin D measurement might not reflect long-term levels. We made an arbitrary decision to use the lowest vitamin D measurement for analysis because this value was thought to most likely represent the subjects’ baseline nonsupplemented level. We were unable to accurately associate the timing of vitamin D measurement and supplement initiation. The dose and duration of vitamin D supplementation were not analyzed, and patient compliance was not measured. Inclusion of vitamin D in multivitamin supplements was not considered.

If we further look at the original data 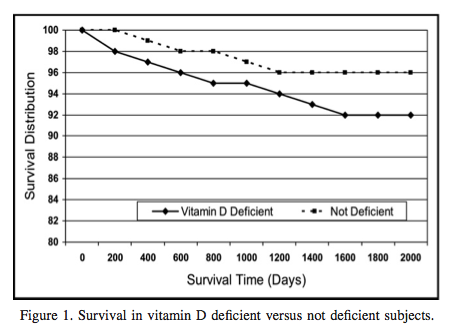 we see a rather poorly constructed plot of a survival analysis where clients of a cardiovascular practice are split by tertiles of vitamin D serum levels. The two lower tertiles have been combined for whatever reasons.

The most wealthy ( best treatment, supplement users? ) and most healthy group ( sunshine exposure, attending for routine checks only? ) shows an about twofold reduced mortality.

There is nothing to worry about this group. What really worries me, is the poor science and the poor journalism behind the news, that “vitamin D deficiency apparently increases all-time death rate”.