Are there any news in the allergy & vitamin D controversy?

Unfortunately there are still no results from VDAART study on early vitamin D effects – even after so many years (and expenses of  >10M $).

According to grantome VDAART started back in 2007 and ended in 2014 (the clinicaltrials.gov listing of 2009-2019 seems to be wrong).  The VDAART trial report at least was reported “to be under review” according to  the Resp Lancet from Dec 2015. 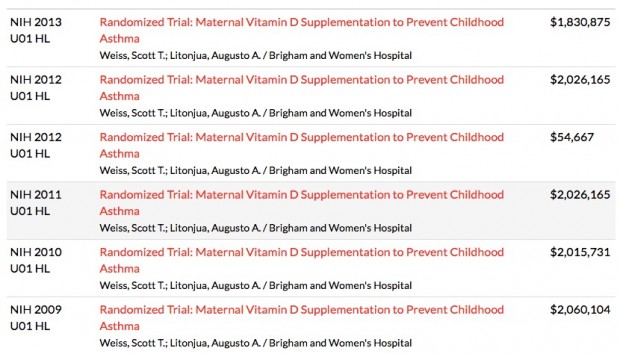 Anyway there is a new report from a British trial by Griffiths et al. as published on Dec, 23:

In an ethnically stratified randomised controlled trial conducted at St Mary’s Hospital London, 180 women at 27 weeks gestation were allocated to no Vitamin D, 800 IU ergocalciferol daily until delivery, or a single oral bolus of 200,000 IU cholecalciferol.

Table 8 shows a 3 – 4 fold significantly increased risk for asthma and eczema (medication) during the first 3 years following supplementation during pregnancy.  Unfortunately, the authors do not report this result in the abstract  – “what is not allowed cannot happen”…

There is also a new Australian trial underway (VITALITY – other early intervention studies are CORK, ABCVitaminD and VIDI totalling to 5 ongoing RCTs).

The VITALITY study protocol reads very much like a protocol that I have submitted to the BMBF some 7 years ago. There is only one major difference: I wanted to show the risks of vitamin D supplementation while funding had been declined for being “unethical” research.

In contrast, the VITALITY authors believe that supplementation will reduce the risk of allergic disease and are therefore in a much better condition to get a study funded. In the end, however, only results will count. It may even be a benefit if you don’t know so much. Of course there are clinical trials like Guy des Montis 1993 or Norizoe 2014 that show a risk of allergic sensitization by vitamin D.