There was a congress abstract earlier this year by Rachid, Rima A et al. in  Journal of Allergy and Clinical Immunology:  “Food Allergy in Infancy Is Associated with Dysbiosis of the Intestinal Microbiota” where 137 infants (52 food-allergic and 85 controls) were enrolled and differences in fecal microbiota tested between the 2 groups. Food-allergic babies at 1-6 months of age had decreased abundances of genera in Bacteroidetes (Parabacteroides and Alistipes). 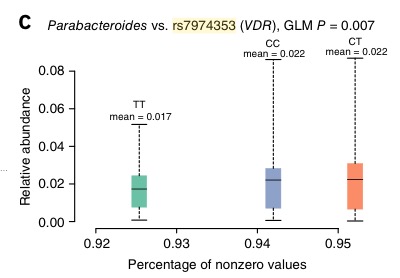 So, is this a missing link?-Can vitamin D supplementation influence the gut microbial flora? This could explain even other observations. Right now rs7974353 is a rare human intronic SNP with no disease annotation.