Ronagh & Souder in “The ethics of ironic science”

We adopt the concept of irony from the fields of literary and rhetorical criticism to detect, characterize, and analyze the interpretations in the more than 60 published research papers that cite an instance of ironic science. We find a variety of interpretations: some citing authors interpret the research as valid and accept it, some contradict or reject it, and some acknowledge its ironic nature.

Related posts: Der chinesische Menschenversuch | No eternal life | A cloud hangs over the paper in question | Too many complaints about eLife | Why men die earlier | 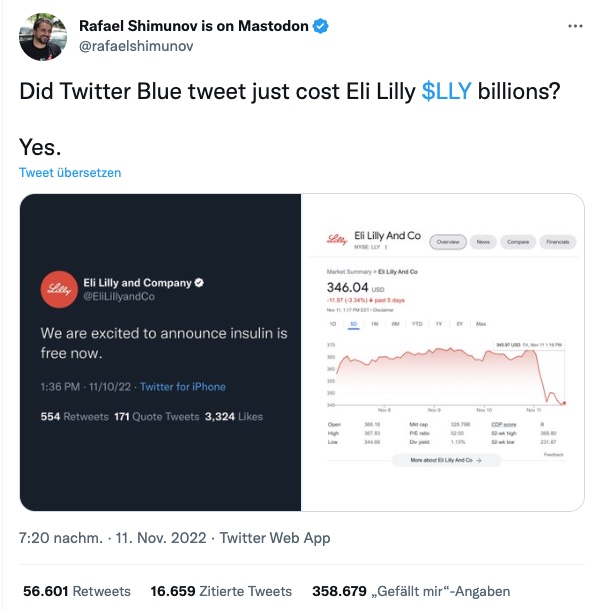 Related posts: Der chinesische Menschenversuch | Limits of science | What the #$*! Do We Know!? | On the impossibility of being expert | Postfaktisch! |

I also wrote about X without knowing why. Here is the answer.

Related posts: Der chinesische Menschenversuch | A better search engine for science? | Can’t believe in a TCRA association (at the moment) | The Gangelt Study | Too much to read too little time |

is surpassed by the follower

just when your compare the barber with the Emma joke.

END_OF_DOCUMENT_TOKEN_TO_BE_REPLACED

The Knight Bus is a triple-decker, purple AEC Regent III RT that assists stranded individuals of the wizarding community through public transportation. It operates at a very fast speed and obstacles will jump out of its way. To hail the bus, a witch or wizard must stick their wand hand in the air in the same manner that a Muggle might do to hail a taxi. The Knight Bus’ conductor is Stan Shunpike, who greets passengers and handles baggage. It is driven by Ernie Prang.

How come the Muggles don’t hear the bus? Because they don’t look for it. Nobody looks for a bus moving at the speed that the Night Bus moves at.

U.S. science is moving at Night Bus speed when the White House issued a new policy yesterday that will require, by 2026, all federally-funded research results to be freely available to the public without delay.

This research, which changes our lives and transforms our world, is made possible by American tax dollars. And yet, these advancements are behind a paywall and out of reach for too many Americans. In too many cases, discrimination and structural inequalities – such as funding disadvantages experienced by minority-serving colleges and institutions – prevent some communities from reaping the rewards of the scientific and technological advancements they have helped to fund. Factors including race, age, disability status, geography, economic background, and gender have historically and systemically excluded some Americans from the accessing the full benefits of scientific research.  To tackle this injustice, and building on the Biden-Harris Administration’s efforts to advance policy that benefits all of America, the White House Office of Science and Technology Policy (OSTP) released new policy guidance today to ensure more equitable access to federally funded research.

What about the German muggles BMBF, DFG,  the major German academies, research and ethics organizations? How come that muggles don’t hear the bus? Because they don’t look for it. Nobody looks for a bus moving at the speed that the Night Bus moves at.

Related posts: Der chinesische Menschenversuch | God is in the house | Apropos Gasboykott – wie hoch ist eigentlich mein Gasverbrauch? | He who has ears to hear, let him hear | Formal peer review may come to an end |

Higher intelligence may have a downside in the modern world, by allowing life satisfaction to be more vulnerable from being better able to comprehend the severity of problems that did not exist in the ancestral world.

In the past few years, Satoshi Kanazawa, a reader in management and research methodology at the London School of Economics, published a series of papers in the Journal of Theoretical Biology with titles such as “Big and Tall Parents Have More Sons” (2005), “Violent Men Have More Sons” (2006), “Engineers Have More Sons, Nurses Have More Daughters” (2005), and “Beautiful Parents Have More Daugh-ters” (2007). More recently, he has publicized some of these claims in an article, “10 Politically Incorrect Truths About Human Nature,” for Psychology Today and in a book written with Alan S. Miller, Why Beautiful People Have More Daughters.However, the statistical analysis underlying Kanazawa’s claims has been shown to have basic flaws, with some of his analyses making the error of controlling for an intermediate outcome in estimating a causal effect, and another analysis being subject to multiple-comparisons problems.

While I wholeheartedly agree with Gelman, his objection nevertheless confirms the hypothesis…

Related posts: Der chinesische Menschenversuch | A passion for precision | Is there an association of CARD15 variants with allergy? | Rejection hurts. Why everybody needs somebody | Is religion a natural phenomenon? |

so beware of shortcuts…

Related posts: Nothing makes sense except in the light of a hypothesis | More heat than light | 1000 genomes quick browser | 1000 Genomes Download | A jubilee – today we have 1000 papers on allergy and vitamin D |

Ever heard of this term? Here it comes

Another feature that was rated useful was evidence of applicants’ ‘academic age’. This was defined as the number of full-time-equivalent (FTE) years for which they’d worked in academia and was calculated from the year of their first academic publication, rather than the year they got their graduate degree.

So while the new Swiss granting scheme looks really nice, I expect that other funders will use the idea and divide impact factor by academic age…

We all know that there are animal co-authors in the scientific literature like the dog of Polly Matzinger. Here is another example, see a further nice story of Sophie Fessl …

Related posts: Corresponding authors do not respond anymore | Publishing on the recommendations of the head of the authors’ lab | Phantom reference | Formal peer review may come to an end | Journal Hijacking |