I always thought that all the interest in epidemiology & biobanking is a rather new development.
But that needs some correction as I just heard about the Virchow study of 1874 at planet-wissen. END_OF_DOCUMENT_TOKEN_TO_BE_REPLACED

This is an update of the recent TCRA post herewhere I argued that TCR studies shouldn’t be done with genomic DNA from peripheral blood cells. Instead, I was arguing for buccal DNA as epithelial cells will not have undergone somatic recombination. Only last week, however, I came across an earlier letter about DNA-based assessment of chimerism after allogeneic blood stem cell transplantation (BSCT). END_OF_DOCUMENT_TOKEN_TO_BE_REPLACED

Related posts: Some are hybrids, some are not | A man with a female DNA | Allergy transplantation | I do not wish to donate organs after death | Barker to the power of 2 |

Local newspapers just report a suicide – where the corpse had to be identified in the forensic department. Skin cells turned out to be male, blood cells to be female. The solution to this paradox was quite simple END_OF_DOCUMENT_TOKEN_TO_BE_REPLACED

Related posts: Change your genes | Beauty is skin deep but ugly goes all the way to the bones | Asthma – a disease of the gut | Forgotten papers: Allergy origins in the gut | A revival of DNA pooling |

Of a proven set of regulatory regions in zebrafish, computer programs find only between 29% and 61% of the true motifs. This does not come very much unexpected given the vast array of data shown by the Encode project. It even relates to the most basic question: What is a gene?

The more expert scientists become in molecular genetics, the less easy it is to be sure about what, if anything, a gene actually is.

iwith at least 5772 21U-RNAs? So – if I am sitting on the other side of the table when you are being examined don’t talk about junk DNA anymore, yea, yea.

Did you ever came across DANN sequencing or plasmid DANN? 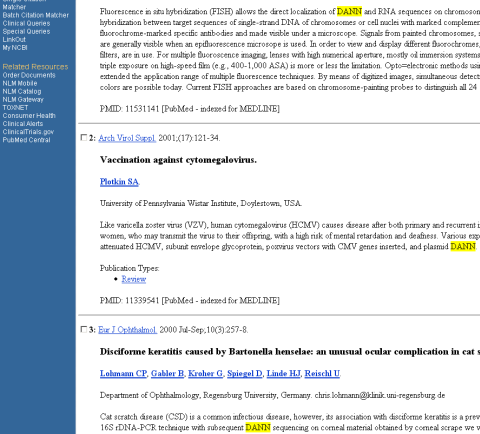 You may even earn money with typos …

My interest in DNA pooling was always strong; we have developed methods doing this on the mass spec platform and applied it to the HLA region. I had, however, doubts if testing pools by less accurate methods like chip hybridization will work. The January issue of the AJHG now has a fascinating article how pooling may even work on the Affymetrix platform. Yea, yea.

DNA pooling can be even used in family context, see Wen Chung Lee in Cancer Epidemiology 2005 or Neil Risch in Genome Research 1998.

In a recent book chapter we discussed new genotyping and sequencing technologies. Our concluding remarks havenÂ´t changed so much – it seems that realtime detection of single molecules is still not possible; micro electropheresis based methods have already reached their limit while sequencing by hybridization has severe restrictions when it comes to de novo (or re-) sequencing of whole genomes. At least for research purpose I expect that whole genome re-sequencing will replace current SNP based disease mapping. So far, sequencing by synthesis seems to be one of the few HT methods that already works at that scale. The 454 platform consists of 3 consecutive steps:

With an average read length of 100 bp and 200,000 fragments (resulting in 20 Mb) in 6 hours, the throughput is about 60fold compared to Sanger sequencing. The recent Neanderthal paper raises five arguments why the 454 sequencing platform is extremely well suited for analyses of bulk DNA extracted from ancient remains.

Except of the low read length most of these observations would benefit large scale resequencing projects in human individuals. My main point for starting ASAP resequencing projects: So far we have not achieved a dense resolution of the genome while deep resequencing project (for example at the CRP locus) got astonishing results. We do not even know what is going on in the “noncoding” regions. Finally deletions and CNVs have been largely neglected – another look at this question in the EJHG.
The question remains, what does 454 mean – my inquiry is still pending. As far as I know 0815 was a machine gun in World War I and is a synomym for something repeatedly boring while 4911 is a street number and stands for a perfume. Yea, yea.

Related posts: Genetic code and God’s language -cont’d- | Genomics of a single cell | Nothing makes sense except in the light of a hypothesis | How to detect your own CNVs | Evolution in fast motion |

There is a new book by Francis Collins “The language of God“, one of the leading persons in human genome sequencing. As the commentary says:
END_OF_DOCUMENT_TOKEN_TO_BE_REPLACED