So far I thought this is not happening in humans, but a  PNAS paper published this month shows it may be even a genetic trait as the authors found biparental mtDNA inheritance in 17 members in three multi-generation families.
There are around 50-75 mitochondria in a single sperm which appears to be a quite low number (∼0.1%) relative to the number maternal mitochondria.
This unexpected paternal origin of mtDNA raises questions how exactly paternal mtDNA can escape its normal fate of being eliminated from the embryo. Are paternal mitos just being diluted and there is much more (micro-)heteroplasmy than currently known?
I don’t know why the authors didn’t do formal linkage analysis. And I also don’t know if their conclusion is correct “that occasional paternal transmission events seem to have left no detectable mark on the human genetic record” not citing an 1996 PNAS paper

In the majority of mammals—including humans—the midpiece mitochondria can be identified in the embryo even though their ultimate fate is unknown. The “missing mitochondria” story seems to have survived—and proliferated—unchallenged in a time of contention between hypotheses of human origins, because it supports the “African Eve” model of recent radiation of Homo sapiens out of Africa.

In the age of single cell sequencing it may no more be adequate to believe in maternal inheritance alone.

I am curently working on a new lecture series on that topic – having a gut feeling that the evolutionary history will explain how and why we get diseases. Some German magazines (“Fehlkonstruktion Mensch” DER SPIEGEL 40/2009) even write about that topic quoting a forthcoming book of Ganten / Deichmann / Spahl). I will rely, however, mostly on END_OF_DOCUMENT_TOKEN_TO_BE_REPLACED

There is a new website showing the history of some memes. I wish we would have something similiar at Pubmed. The vitamin hypothesis at least seems to take off (with the data for 2009 being a projection). 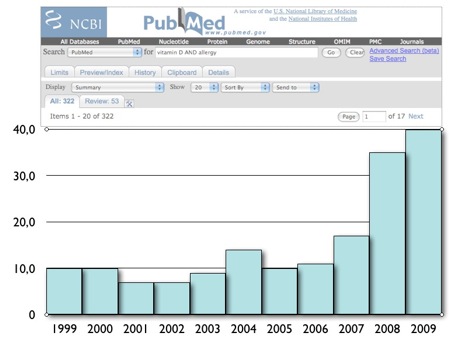 Human emotional expressions, such as laughter, are argued to have their origins in ancestral nonhuman primate displays. To test this hypothesis, the current work examined the acoustics of tickle-induced vocalizations from infant and juvenile orangutans, gorillas, chimpanzees, and bonobos, as well as tickle-induced laughter produced by human infants.

Related posts: False Memory | The search for the worst sound |

Related posts: Three things can not hide for long: the moon, the sun and the truth | Would any one trust in the convictions of a monkey’s mind? | In memory of Peter Lipton | The first slide please | Truth in science (and religion) |

This seems to be a question with not so many good answers. “The origins of genome architecture” (Sinauer, 2007) has a nice chapter on “Genes in pieces” covering

Mechanisms about intron gain center about AGGT tetramer duplication that result in new splice sites —AG|gt … ag|GT— with the segment in lower cases being the new intron. (What I found a funny fact, when working for the first time with genomic sequences around 1994 is the “codon ignorance” and “domain ignorance” of introns while on the other hand allowing for alternative splicing). Another mechanism of intron gain may be transposable elements although retrotransposons cannot deliver introns as they are spliced out. More likely are already released introns and ectopic reintegration. Another (not mentioned mechanism) could be random mutations activating cryptic splice sites.
The key question remains END_OF_DOCUMENT_TOKEN_TO_BE_REPLACED

Related posts: Divide and conquer | Another challenge of the hygiene hypothesis | 10 commandments | (Re)programming adult into pluripotent cells | Where do I come from, where will I go |