From the two trios, we directly estimate the rate of de novo germline base substitution mutations to be approximately 10^-8 per base pair per generation.

along with the fact that

on average, each person is found to carry approximately 250 to 300 loss-of-function variants in annotated genes and 50 to 100 variants previously implicated in inherited disorders.

Related posts: How we inherit acquired traits – all about non random mutations in the human genome | A longe fuse | 3,93 mutations / Mb | Drop the last 3 nature genetics volumes from the libraries | Many receive advice, few profit by it |

The AJHG preprint server has an important paper about the effect of rare missense alleles. By combining information from HGMD, human – chimpanzee divergence and 4 other datasets (NIEHS-EGP, Seattle SNPs, JSNP and a resequencing approach of 58 genes in >1,500 chromosomes) they attack the Chakravarti hypothesis of “common diseases – commmon variants”

It remains uncertain why such polymorphisms can persist without being eliminated by purifying selection. Currently, two major lines of reasoning exist that explain this apparent paradox. The first considers various complex evolutionary scenarios and treats positive or balancing selection as a major force that can drive medically detrimental mutations to high frequencies. The second line of reasoning postulates a high mutation rate as a major factor that determines the cumulative frequency of detrimental polymorphisms in the population.

Anyway, here is the main outcome

Related posts: Why we should believe professional cyclists | Nothing makes sense except in the light of a hypothesis | What people search for | Best of two worlds | Time bomb – revisited |

Mutation accumulation in the human genome is a largely neglected research field. Most mutations have a very small effect (if any) and may be compensated by environmental improvements. I have already argued in that way in my 2003 Triple T paper and will reiterate it soon in PLOS medicine (just found that James Crow 1997 in PNAS and 2000 in nat gen rev had the same opinion). In principle, the improvement of sanitation and better medical care is leading to a retention of mutations that would be otherwise subject of purifying selection.
Another important factor seems to be the increase of parental age in Western societies. A 20 year old man had about 150 chromosome replications while a 40 year old had about 610 replications. To count the number of your somatic mutations, you need to add all events of your lifetime plus the age of your father at birth minus 9 months … Even with the high fidelity of polymerases, DNA replication remains an error prone process leading eventually to an increase of germline mutations (as may be seen with achondroplasia, Apert syndrome, neurofibromatosis and prostate cancer). With the increasing age of fathers we are now nearly doubling the absolute number of mutations every generation – and we keep them in the pool in contrast to previous centuries. Crow in PNAS 1997 even said 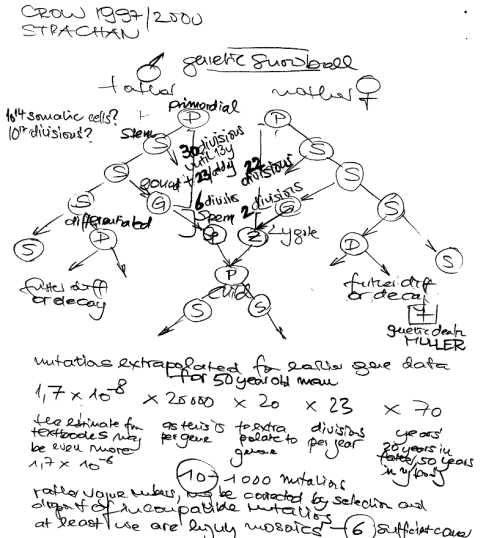 In another post, I detailed the 3,93 figure derived from cancer tissues. The best human estimate at the moment is in this Cell paper that shows a rate between 2.0 and 3.8 x 10^-8 cells. Sperm sequencing may not represent a good model as there are too many degenerate cells.

Here is a new nature medicine paper on cell turnover.

What I do not understand – shouldn’t we  have a much higher leukemia rate in the population? Leukemia is only  on the11th place. 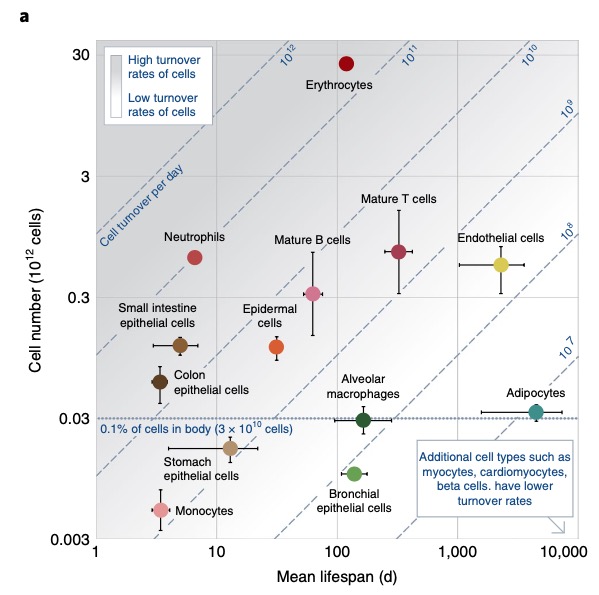 Differentiated cells in blood and colon displayed remarkably similar mutation loads and signatures to their corresponding stem cells, despite mature blood cells having undergone considerably more divisions. We then characterized the mutational landscape of post-mitotic neurons and polyclonal smooth muscle, confirming that neurons accumulate somatic mutations at a constant rate throughout life without cell division, with similar rates to mitotically active tissues …

this could be the answer to my previous question

These mutations may result from the interplay between endogenous DNA damage and repair that occurs in cells at all times. The similar mutation burden and signatures in granulocytes and hae- matopoietic stem cells, despite a different divisional load, could also be consistent with a time-dependent rather than a division-dependent accumulation of somatic mutations during haematopoiesis

although it will need independent corroboration before making any conclusion that damage repair is more important than replication.

Related posts: More about parents and self | Ethnographic studies at Oktoberfest | Evolution in fast motion | Systems biology | Genomics of a single cell |