This paper has a nice table that I am visualizing here. From left to right there are 5 groups (A — E) with increasing POSTnatal mortality (during month 1 — 12). From top to bottom there also 5 groups of increasing neonatal mortality (years 1911-1925). 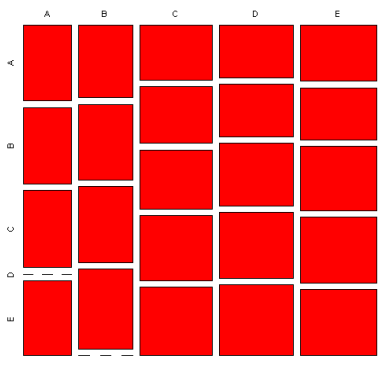 Spend 3 minutes here – the figure above shows coronary heart disease where the size of each red square corresponds to the mortality/1000. Neonatal mortality slightly increases from top to down in all postneonatal groups – CHD has origins in pregnancy.

The same paper also has data on bronchitis mortalityÂ  (for convenience I take it here as a synonym for asthma) which looks quite different. Mortality rises steeply with increasing postneonatal morbidity – from left to right but NOT from top to bottom. 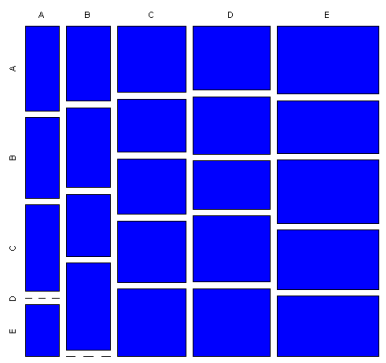 This effect seems to be even stronger than the pregnancy effect for CHD. It may be another piece of the puzzle that I described in scienceblog:doi:10.1371/journal.pmed.0040072:

At the beginning of the last century acute respiratory infections in Europe had been the main reason for childhood death, causing many children to die before reaching reproductive age. Vaccination programs, better nutrition, and antibiotic treatment, however, have reduced mortality from acute respiratory infection while the asthma incidence increased at the same time … suppression of natural or purifying selection … may have enormous consequences on a population level: In Europe, mortality under the age of 5 years was about 250/1,000 live-born children in 1900, dropped to 50 around 1950, and is now about five. In sub-Saharan Africa in 2000, there are still 175 deaths per 1,000 live births.

Why did we not find the main asthma genes so far? Could there be a gene or CNV with a heterocygote (Aa) advantage in fighting infections where homocygote (aa) frequency has been on the rise only recently? If being true, only rather young families will show up enough informative heterocygotes to run a succesful TDT. 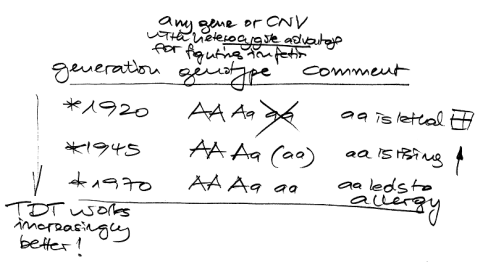 Related posts: The single asthma gene | Notes on asthma in Africa | On mice and men with asthma | Vitamin D and asthma | Hubs and superhubs in asthma: low activity |