The BBC headline yesterday is close to the famous quote of Neil Amstrongs’ with reporting the United States blocking now genetic discrimination. 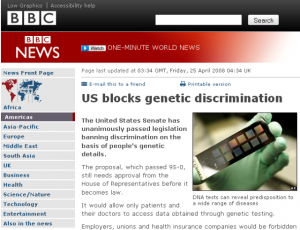 Or as Kennedy put it forward “the first new civil rights bill of the new century”. Unfortunately, we are lagging behind in Europe. My recent initiative to promote such a legislative in Germany was futile; the most recent goverment proposal only earned a lot of criticism.