moblog – When being in Warsaw for the first time I wanted to honour Henryk Goldszmit / Janusz Korczak by visiting the orphanage. This was a home for Jewish children in the Jaktorowska (former Krochmalna) Street. Henryk, born 1878 or 1879, a physician, writer and outstanding pedagogue was the director of the orphanage since 1913. It moved during the Nazi occupation to Chlodna street, then Sliska Street. On August 6th, 1942, all children were taken to the Umschlagplatz and then to the Death Camp in Treblinka. Henryk voluntarily accompanied his children. All died in Treblinka.
There isn`t any other city where you are still physically touched by the cruelties of the Nazis walking along the route from the Monuments to the Heroes of the Ghetto to the Umschlagplatz – which is a German word meaning reloading point. I am understanding now Willy Brandt for falling on his knees.

The photo below shows the courtyard of the orphange. 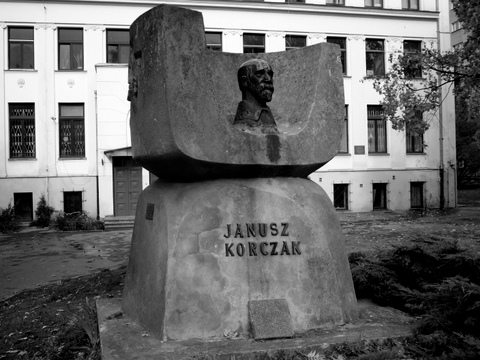