So far I naively quoted others – “only to better express myself” (Michele de Montaigne). This will, however, change now after having read “The Quote Verifier – who said what, where and when” by Ralph Keyes. He nicely explains in the foreword that the misattribution process is not random

… Patterns can be discerned. If a comment is saintly, it must have been made by Gandhi (or Mother Teresa). If it’s about honesty, Lincoln most likely said it (or Washington), about fame, Andy Warhol (or Daniel Boorstin), about courage, John Kennedy (or Ernest Hemingway). Quotations about winning had to have been made by Vince Lombardi (or Leo Durocher), malaprops by Yogi Berra (or Samuel Goldwyn). If witty, a quip must have been made Twain’s concoction, or Wilde’s, or Shaw’s, or Dorothy Parker’s.

I can really recommend this book. I am only hesitating to write more now as I learned that “A man is known by the books he reads, by the company he keeps, by the praise he gives”. Yea, yea. 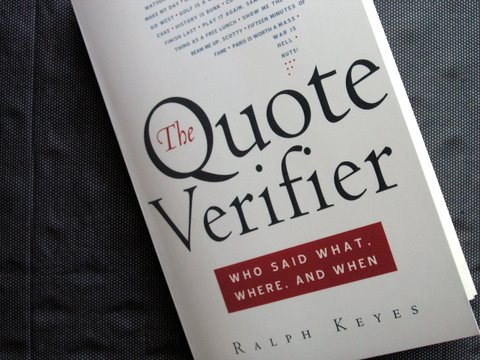