May 29, 2008 Nature has an interesting commentary by Peter Lawrence (66) about the archaic? practice of retirement of active scientists at a determined age. 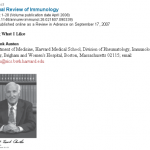 It may be a quite luxurious habit of the science business – people who want to work longer than a certain age – which can be understood by the freedom of “Doing what I like”. Having a mostly pleasant life here on earth as a scientist, it may be a quite logical wish of a 66 year old to prolong the scientific career. Of course it may be also a true value also for a society to have an ingenious spirit also for another decade at work. Brenner is being cited as

I know many 35 year olds who should be retired and some 70-year olds who are the best post-doc you can ever find.

So it may be harsh reality (and even quite good) that the career of most scientists ends at a certain age. There is a saying here that “wrong ideas only die with their proponents”. As the suggested “eternal tenure” will prohibit science progress, I am not convinced to “retire retirement”. So can I only partially agree that

every institution ought to evaluate each elderly person and provide them with the means of continuing their work if they remain productive.

Certainly, I would (1) evaluate only those scientists that ask for evaluation (2) would only accept applications from people that are doing active work (first author papers beyond presidential addresses, fingerprints on pipettes in the lab, harddisk activities beyond powerpointing) and (3) as evaluations are largely subjective, I would ask for 50 or 100 affirmation emails by accredited scientists. For all other ordinary people like me, there is still be an universe of of important things even outside of a formal profession. The problem at least here in Germany is not so much retirement at 65 but the nearly absent possibility to change any university affiliation at about 48 years. Fortunately there are more ways

to allow the pursuit if happiness to our proficient older citizens

There seems to be even empirical research that with advancing age the probability goes down to make any new discovery – check the link.