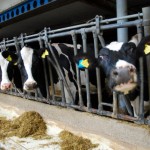 There is increasing evidence that environmental exposures determining childhood illnesses operate early in life. Prenatal exposure to a farming environment through the mother might also play an important role … Both atopic sensitization … and the gene expression of receptors of innate immunity were strongly determined by maternal exposure to stables during pregnancy, whereas current exposures had much weaker or no effects … Each additional farm animal species increased the expression of TLR2, TLR4, and CD14 by a factor of 1.16

Several epidemiological studies have shown that the farm environment impacts allergy protection mechanisms in children … In investigating the link between farming lifestyle and prevention of childhood allergy, we examined the prevalence of Listeria spp. in dust specimens from the environment of rural children … The dominant species found by culturing methods were L. innocua (n=12) and L. monocytogenes (n=8).

There is increasing evidence that the farming environment has a protective effect as regards allergic diseases. Exposure to animal parasites, particularly helminth infections, is common in the farming environment. Exposure to nematodes, as determined by the levels of antibody to A. lumbricoides, was more frequent among farmers’ children than non-farmers’ children… This positive serology was found to be significantly associated with high total IgE levels … and eosinophilia.

In recent years, studies have shown a protective effect of being raised in a farm environment on the development of hay fever and atopic sensitization…Inverse relations with a diagnosis of asthma were found for pig keeping …, farm milk consumption …, frequent stay in animal sheds …, child’s involvement in haying …, and use of silage … Protective factors were related with higher expression levels of genes of the innate immunity.

Sorry, it’s everything: the pig, the milk, haying and silage.

Hey, milky ways ahead something new: the horse!

There is still uncertainty about the determinants of atopic eczema … In multivariate analyses, helping with haying was the only variable related to a farming environment having a consistent inverse association with both current symptoms and a doctor’s diagnosis of AE.

Numerous epidemiologic studies have demonstrated an allergy-protective effect of farm life early in childhood …In vitro, B. licheniformis spores activated a T(H)1 cytokine expression profile. In vivo application of these spores resulted in less spore-specific but long-lasting immune activation preventing eosinophilia and goblet cell hyperplasia; however, they provoked an influx of neutrophils in lung tissue of asthmatic mice.

What about bacillus spores?

Contact with farm animals, at least in childhood, likely confers protection; other factors have not been completely identified. Also, the consumption of milk directly from the farm during childhood has been shown to be beneficial with respect to childhood asthma and allergies.

Ok, it is milk. Are you still readings here?

This week I am back with the most exciting research

Previous cross-sectional surveys have suggested that maternal exposure to animal sheds during pregnancy exerted a protective effect on atopic sensitization in children lasting until school age … Different sensitization patterns in cord blood of farm and nonfarm children were observed. In multivariable analysis consumption of boiled, but not unboiled, farm milk during pregnancy was positively associated with specific IgE to cow’s milk independently from maternal IgE.

This paper counts dung hills The authors even invent a new classification (sorry, not dung hill height but “50 m distance between dung hill and house”).

And did you also wonder why paternal history is no more a risk in thesel studies? There are only a few allergic parent due to healthy worker effect…
No adjustment for multiple testing “because it will lead to fewer errors of interpretation when the data under evaluation are not random numbers but actual observations on nature” That is one of the most stupid sentences I have ever read.

The overall response rate in this study is 32% and the strongest risk for cord blood IgE is maternal IgE. Is there any statistical model that can account for poor data by contamination of newborn cord blood with maternal IgE? And uhh, 32% response is that really a representative sample?

The mantra at the beginning at each of the abstract above is certainly necessary to let us believe in the rest of these papers.

Using the cowshed-derived bacterium Acinetobacter lwoffii F78 together with a mouse model of experimental allergic airway inflammation, this study investigated the hygiene hypothesis.

Addendum 1/1/2018
The research above has now lead to the highest German Science Prize, an honorary doctorate, an ERC advanced grant, a Leopoldina and Bavarian Academy membership.

Related posts: Lactase variants in Europe – any connection to allergy? | Time to give Blackley the credit he deserves | Vitamin D: A 18%! reduction in early infant mortality | Is “vitamin” D a biological hub? | Notes on asthma in Africa |