The most recent Edge issue cites

… Kahneman’s view that “the administration’s unwillingness to face reality in Iraq reflects a basic human aversion to cutting one’s lossesâ€”the same instinct that makes gamblers stay at the table, hoping to break even.”

as well as another one of Kahneman’s ideas

“Why Hawks Win” was published in Foreign Policy (January/February 2007); Kahneman points out that the answer may lie deep in the human mind. People have dozens of decision-making biases, and almost all favor conflict rather than concession. The article takes a look at why the tough guys win more than they should.

Fortunately, the “hawks win” article is open to the world — highly interesting also for those interested in science sociology. I believe that 80% of scientists asked probable think they believe to perform better than average (although only 50% can do ;-) 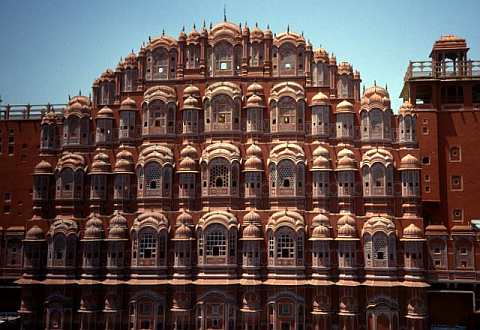 The photo above was taken 1992 in Jaipur / India – it shows the Hawa Mahal “Palace of Winds” constructed for the royal ladies of the court, most likely a viewing gallery. The building seen here from the front is just a faÃ§ade — as can be seen from another photo on the net.