I wondered if Chorea Huntington may be unintentionally diagnosed by current SNP chips used in research projects of other diseases. On a first glance, this seems to be unlikely – we are dealing with repeated CAG repeats in huntingtin located on chromosome 4p16.3 that are not easily accessible by SNP panels. An earlier paper described linkage with the microsatellite D4S10. But that’s linkage not association and the probability remains low that any (random) SNP chip can diagnose Huntington. Or – are there any disease haplotypes? When discussing this question with a colleague, he pointed me to a follow-up article in Nature March 12, 1987 where indeed, studying the same Venezuelan pedigree from lake Maracaibo, a haplotype in the D4S10
region was found. This 17 kb fragment could be characterized by 4 RFLPs, forming 7 haplotypes where only one (the C1 haplotype) was associated with HD. So there is some chance that a closer related haplotype in an outbred population may be constructed from GWA data that is associated with HD. 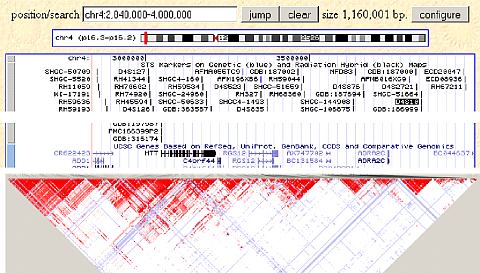 Or will there be other gene variants like MSX1 loci that are interacting with huntingtin? I will take the opportunity next week to ask the discoverer of the HD gene if there are any GWA data that may allow a diagnosis of Huntington, yea, yea.

Related posts: Best of two worlds | In the heat of the night | INDELligent |