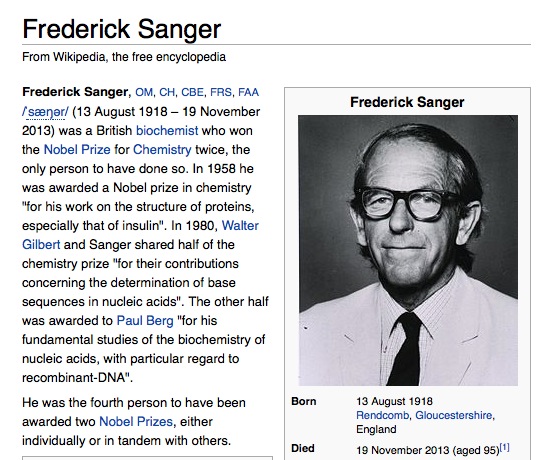 There has been so much written about Frederick Sanger (see nobelprize.org or Sanger Centre itself) while I like most what he wrote himself in Annual Reviews 1988:

These prefatory chapters are usually accounts of biochemists’ experiences in research, teaching, and administration. In my case the last two are easily dealt with as I have done hardly any and have indeed actively tried to avoid both teaching and administrative work. This was partly because I thought I would be no good at them, but also out of selfishness. I do not enjoy them, whereas I find research most enjoyable and rewarding.

A Fred Sanger would not survive today’s world of science. With continuous reporting and appraisals, some committee would note that he published little of import between insulin in 1952 and his first paper on RNA sequencing in 1967 with another long gap until DNA sequencing in 1977. He would be labeled as unproductive, and his modest personal support would be denied. We no longer have a culture that allows individuals to embark on long-term—and what would be considered today extremely risky—projects.

Sanger remains one of my heroes – the only scientist from whom I possess an autograph, bought a decade ago on Ebay.

Related posts: I had a dream tonight | The DNA window at the King’s College Chapel at the Strand | World record | Seoul update of the WMA declaration – you lost your rights | Multiple layers of heritability like a Russian matryoshka doll |