When working on a forthcoming talk about the ethics of correcting gene defects, I asked myself: Are there any empirical examples where the correction of a so called “deleterious” mutation may be a disadvantage? Or in other words: Are there any beneficial side-effects of otherwise deleterious mutations?

(Don’t answer this with the joke that the Y chromosome is a X with a large deletion :-)

Yes, there are some examples of heterozygote advantage

Maybe I am not asking if there are beneficial/deleterious mutations in a single gene – the question here is more about distant / cis-regulating elements.  And there seems to be a thesis that

deleterious mutations have long been thought to be unimportant, however this view overlooks the pivotal role of epistasis. The unique experiments presented here give new insights into the historical and highly contingent nature of evolution. While evolution frequently finds a well adapted solution in the long-term, evolving populations will frequently climb suboptimal peaks initially. Deleterious mutations become useful because they aide evolution in reconciling short-term and long-term adaptation.

the thesis made it also into a PNAS paper

Looks like humans shouldn’t interfere with their own evolution as long as the rules are not known… The PNAS paper above has been cited many times, it will take some time to scan these for more empirical examples.

From the CCR5 sequence we get the following amino acid sequences

The -15/WT genotype will have both, a normal and a slightly shortened CCR5 giving no HIV protection at all. The -4/+1 genotype may suffer the fate of non-sense mediated decay. Here are the amino acid predictions for each genotype (I reverted to Topcocns as Protter had some problems in generating correct plots).

From the original AJHG paper, however, also delta 32 carriers may be HIV infected. As there exists also non-CCR5 dependent virus replication, also Nana is at risk of HIV infection when being virus exposed. 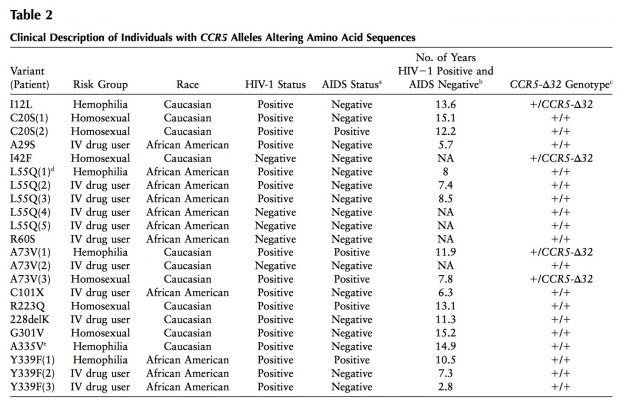