I will present this poster next Monday in San Francisco at the Annual Conference of the American Thoracic Society. 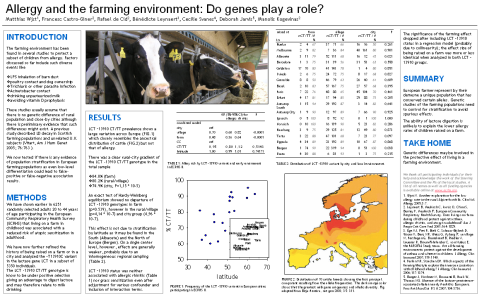 The farming environment has been found in several studies to protect a subset of children from allergy. Factors discussed so far include such diverse events like LPS inhalation of barn dust, poultry contact or dog ownership, Trichiuris or other parasite infection, Acinetobacter contact, drinking unpasteurized milk or avoiding vitamin D prophylaxis. These studies usually assume that there is no genetic difference of rural population and close-by cities although there is preliminary evidence that such differences might exist. A previous study described LD decay in Scottish farming populations and unrelated U.K. subjects (AJHG 2005; 76:763 ). We now tested if there is any evidence of population stratification in European farming populations as even low-level differentiation could lead to false-positive or false-negative association results.

METHODS
We have shown earlier in 6251 randomly selected adults 20 to 44 years of age participating in the European Community Respiratory Health Survey (ECRHS) that living on a farm in childhood was associated with a reduced risk of atopic sensitization in adulthood. We now refined the history of being raised on a farm or in a city and analyzed the â€“T13910C variant in the lactase gene LCT in a subset of 5350 individuals. The LCT -13910 CT/TT genotype is know to be under positive selection giving an advantage to digest lactose and may therefore relate to milk drinking.