First use of liver cod oil probably originates with the fishing communities of Norway, Greenland and Iceland several centuries ago – an excellent reference is at “Cod liver oil and chemistry” 1895 by Peckel Möller. This book has a nice account on fishing at the Lofotes around the turn of the last century with many details about the cod fish migration.
The first medical use is being dated to 1789 and credited to Dr Darbey of Manchester Infirmary.

100 liter of liver oil could be produced from about 400 livers simply by letting the livers (including gallbladder) rot for several months. As might be imagined, smell, taste and digestion of this primitive preparation was terrible and only consumed by a few people when in 1853 a new steam based extraction could be invented producing a more or less colorless oil. By this invention Norway continued to be the main producer of liver cod oil 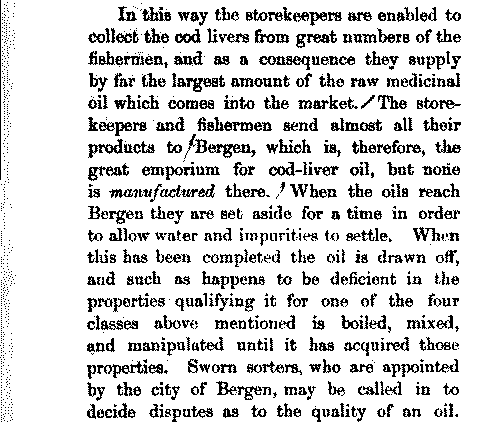 According to a later report in 1932 Norwegian liver cod sales kept to be high while the oil was mainly used as poultry feed at that time. 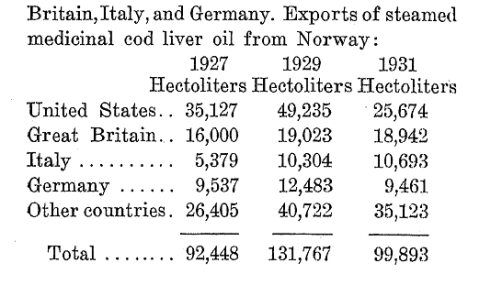 This might be interesting as vitamin D could be chemically synthesized as “Vigantol” since 1927 (shown in a new book on Windaus) while liver cod oil is still on the market today.

Bergen continues to be the cod oil capital – see the Hordaland and the Rhine study.

Related posts: Nothing but skin and bone… | The sunshine cure |