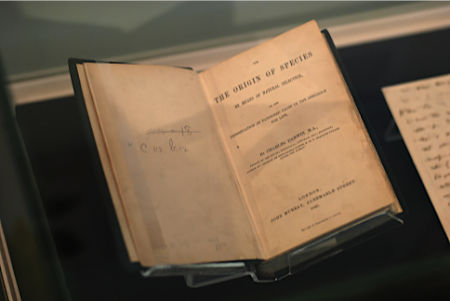 Here is a picture the original 1859 edition of the “Origins” while I still wonder if this book is about the origins or about the transitions of species.
That may be understandable as I am currently reading David Berlinski’s 2008 book “The Devil’s Delusion”. His (English) Wikipedia entry is not very friendly written while I like his humoresque, sometimes bizarre but always to the point style.
At the end of the day he may be right with many of what he is saying. A lucid example of his writings may be found online – what he is saying about the implications of Darwins thinking (and in more detail) about the final regress to Hitler.

Published in 1859, Darwinâ€™s On the Origin of Species said nothing of substance about the origin of species. Or anything else, for that matter. It nonetheless persuaded scientists in England, Germany and the United States that human beings were accidents of creation. Where Darwin had seen species struggling for survival, German physicians, biologists, and professors of hygiene saw races.
They drew the obvious conclusion, the one that Darwin had already drawn. In the struggle for survival, the fittest win out at the expense of their rivals. German scientists took the word expense to mean what it meant: The annihilation of less fit races.

Related posts: La gaya scienza | Who will survive? | Genetics making up of Homo sapiens | Would any one trust in the convictions of a monkey’s mind? |