The screenshot below shows my desperate search why my Macbook wouldn’t boot again (following a cold reset writing a large Photoshop CS5 file for more than 15 minutes).

The verbose boot mode (APPLE+S) showed some error with the journalling system, basically an error as described at the currently non functioning Apple Support Board

I didn’t want to follow all these nice advices out there like reformat/restore or buying Disk Warrior. After 2 hours I came up with hfs util rthat finally did the trick by stopping the journal even on a disk that could not be mounted using the -N switch. 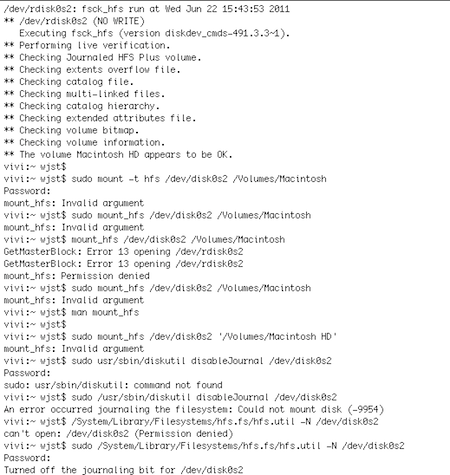 On the next reboot and some file permission corrections, journalling could be switched on again without any problems (although that may not even be necessary on a standalone machine), yea, yea.