22 newly sequenced faecal metagenomes of individuals from four countries with previously published data sets, here we identify three robust clusters (referred to as enterotypes hereafter) that are not nation or continent specific.

The 3 clusters are Bacteroides (enterotype 1), Prevotella (enterotype 2) and Ruminococcus (enterotype 3) – no idea if these are under selective pressure from the host (genes!), from enviroment (antibiotics!) or from microbial competitors. When we look, however, at another study published also last week at Science magazine, it seems that at least one cluster has it’s own trick to get the right of residence by synthesizing a symbiosis factor.

Toll-like receptors (TLRs) mediate recognition of microbial patterns to eliminate pathogens. In contrast, we demonstrate that the prominent gut commensal, Bacteroides fragilis, activates the TLR pathway to establish host-microbial symbiosis. TLR2 on CD4+ T cells is required for B. fragilis colonization of a unique mucosal niche in mice during homeostasis. A symbiosis factor (PSA) of B. fragilis signals through TLR2 directly on Foxp3+ regulatory T cells to promote immunologic tolerance. Remarkably, B. fragilis lacking PSA is unable to restrain T helper 17 (Th17) responses and is defective in niche-specific mucosal colonization.

So host factors are relevant… Symbiosis factors are not new. Having been evolved during a long history of mankind and are therefore unlikely culprits for the short history of allergy. A recent nature review on diet and gut immunology shows

an interesting case is that of Japan, where there is a high degree of hygiene and considerable urbanization but much less asthma than in Australia or the USA … Another observation that would challenge the hygiene hypothesis is that the urban poor in the USA have a higher incidence of infectious diseases such as tuberculosis but still have a high incidence of asthma…

At least dung hill counting did not work in the past and is unlikely to do so in the future despite millions of EUs wasted by the ERC, see interview).

Sorry, mixing facts and fiction here.  According to a new paper in JEM the story (if any) may be even more about innate and cytokine-driven signals, rather than microbial antigens. 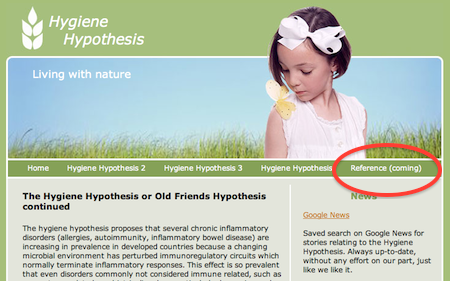 Finally, there is now a website hygienehypothesis.com  According to whois it is run by someone in the UK who is being credited on another website

In attempt to get rid of his allergies for the upcoming allergy season, he took a trip to Africa and when he walked places he would walk barefoot. This is because he would have a more likely chance of getting a hook worm in his body.

Uh, spraying Listeria into your nose or letting a hookworm bite your leg?? Nay, nay.

Related posts: Bleach use and allergy | Believe me, it ‘s not hygiene | Hubs and superhubs in asthma: low activity | Another challenge of the hygiene hypothesis | The largest study so far on serum cytokines |