Many professional cyclists are suffering from “asthma”, a diagnosis that can be easily used like “headache” if you know how to blow a typical lung function test. You are then prescribed beta2 agonists and a get the diagnosis excercise induced asthma.

For good reasons, salbutamol is prohibited by the WADA, the world anti-doping agency. So, I would expected asthmatic patients to take part in activities like the paralympics for simple reasons:  High-tech prostheses could give runners an unfair advantage and high tech drugs opening the airways of cyclists will lead to an increased air exchange with less efforts.

Nevertheless the WADA allows exceptions by providing “TUEs” until 2009, since 2009 a declaration of use:

The highest risk for developing asthmatic symptoms is found in endurance athletes and swimmers. … Asthmatic athletes commonly use inhaled ß2-agonists to prevent and treat asthmatic symptoms. However, ß2-agonists are prohibited according to the Prohibited List of the World Anti-Doping Agency (WADA). An exception can be made only for the substances salbuterol and salmeterol by inhalation, as long as a so called “therapeutic use exemption” (TUE) has been applied for and was granted by the relevant Anti-Doping authorities, and for salbutamol and salmeterol by inhalation. Since the beginning of 2011 for the latter two substances neither a TUE nor a Declaration of Use (DoU) is required as it is for formoterol from beginning of 2012).

Rules were quite clear in the past: Alessandro Petacchi was banned from November 2007 to August 2008 for salbutamol overdosing;  Diego Ulissi received a nine-month suspension ending in March 2015 after having found almost twice the permitted concentration of salbutamol in his urine.

The most recent 2 July 2018 decision of the WADA right before the start of the Tour de France 2018 was unexpected for denying any Adverse Analytical Finding (AAF) in the Froome case.

Whatever we believe is being correct, it  shows at least the inability of the WADA to reach at any conclusion within a reasonable time period. Froome was already tested positive for excessive salbutamol on 7 Sept 2017.

The WADA’s announcement follows that of the UCI earlier today, which announced that the anti-doping proceedings involving Mr. Froome have now been closed. Based on careful consideration of the facts, the Agency accepts that the analytical result of Mr. Froome’s sample from 7 September 2017 during the Vuelta a España, which identified the prohibited substance Salbutamol at a concentration in excess of the decision limit of 1200 ng/mL(1), did not constitute an Adverse Analytical Finding (AAF).

Unfortunately neither the ASO (the Tour organization) nor cycling fans wanted Christopher Froome to participate in the 2018 Tour de France. I largely agree with Velonews

At present we condemn dopers because our concept of fairness is treated as absolute and clear, but the truth is that the world is far more complex than right or wrong. It’s worth bearing in mind that what is seen as ‘unfair’ competition is not set in stone.

Tom Fordyce of the BBC was given exclusive access to data behind Chris Froome’s 2018 Grand Tour victory at the Giro d’Italia, another exceptional ride of Froome (as in the Vuelta 2017 where he was tested positive).  Fordyce published, however, only unimportant calorie intakes and irrelevant WhatsApp messages. No “fake news” as Richie Porte said, but “fog news”.
What I am interested in, is the number of hubs Froome is taking from the inhaler, his inhalation technique, any short- and longterm effects on heart rate, power output, VO2max and maybe even more. Michael Hutchinson makes the point

The problem with this kind of data is that while it is very nice and we assume it’s accurate, it needs context to make sense of it. It makes perfect internal sense. You need external data. If we knew the power output of every rider in that lead group over the hills towards the end of this stage, if there was anything that didn’t match we’d spot it.

Maybe we even need more than the WADA ever requested from Team Sky?

Chris Froome may have some unusual beta2 receptor variants as we described it as already as 2000 (amino acid positions 16, 27 and 164). Maybe a similar condition as with the Pechstein case / hereditary spherocytosis? Any increased smooth muscle relaxation profile,  more coronary artery dilation or boostered glycogenolysis? The only way to find out more, would be DNA testing, performance and excretion studies with and without beta2 agonists. From the literature I would NOT expect so much benefit of salbutamol on gas exchange but in rare and exceptional cases like Froome, there could be a fair (or unfai)r advantage: ß2-receptor variants improve the metabolic profile, they increase glucose tolerance and decrease leptin resistance, with the Arg16Gly polymorphism giving even a better endurance performance. So Froome might have indeed performance benefits from overdosing salbutamol. Did the WADA ever discussed that? It seems that the Guardian has been arguing in the same way

It had been expected that the Briton would have to undergo a controlled pharmacokinetic study, which would have attempted to replicate the “unique circumstances” that may have caused the abnormal levels of salbutamol in his body. However, in a statement, Wada accepted this was not “practicable”.

It was accepted by the UCI, however, that in this case such a study would not have provided reliable evidence as it would be impossible to adequately recreate similar conditions to when Mr. Froome was subjected to the test, taking into account his physical condition, which included an illness, exacerbated asthmatic symptoms, dose escalation over a short period of time, dehydration and the fact that he was midway through a multi-day road cycling race.

Recreating specific conditions is never possible, so it is a weak argument. What is interesting is the detailed statistics about salbutamol use that we did not know before

So 16% acquittal only… And well, no further criteria for acquittal or suspensions…

Former pro rider Jens Voigt believes that money rules – the UCI fears the damage they have to pay if they are loosing a lawsuit against Froome/Sky (Katrin Krabbe received 1.2 millions).

And again the Guardian

Wada’s director general, Olivier Niggli, also raised the possibility of Wada lowering the dosage for which a TUE for salbutamol would be required. […] Niggli rejected accusations. “Maybe the finger is being pointed in the wrong direction – and maybe what needs to be done is to point the finger at how much we allow athletes to take and maybe be more restrictive. Maybe the weakness in the system is that we are being too nice,” he added. “Maybe we need to be tougher and say: ‘You are going to have to take less, otherwise you need a TUE.’”

Niggli also insisted that the fact Froome was not sanctioned was not unusual for salbutamol cases and that 20% of such cases have a similar result. “These cases are not black and white, which means they require a process,” he said. “I know a lot of people would love it if it was positive or negative, but it is not the case. So until we have a different test, or the science evolves, we will have to deal with it.”

Olivier Rabin, the World Anti-Doping Agency’s director of science, is quoted as

Under current rules athletes are allowed a maximum of 1600 micograms of salbutamol over 24 hours, with no more than 800mg taken in a 12-hour period. But Wada’s director of science, Dr Olivier Rabin, suggested those limits could potentially be cut by between a quarter and a half […]
Froome provided a number of elements, some of which were specific to his case, such as the increase in concentration [compared to the tests undertaken in the preceding days], for example. There was, it seems, a worsening in his asthma due to an infection […] He took a certain number of medicines to treat it and other elements linked to his diet were also taken into account, as were dietary supplements. And other things too.

Froome seriously ill on that day? Finishing as 23rd rider of 162?? 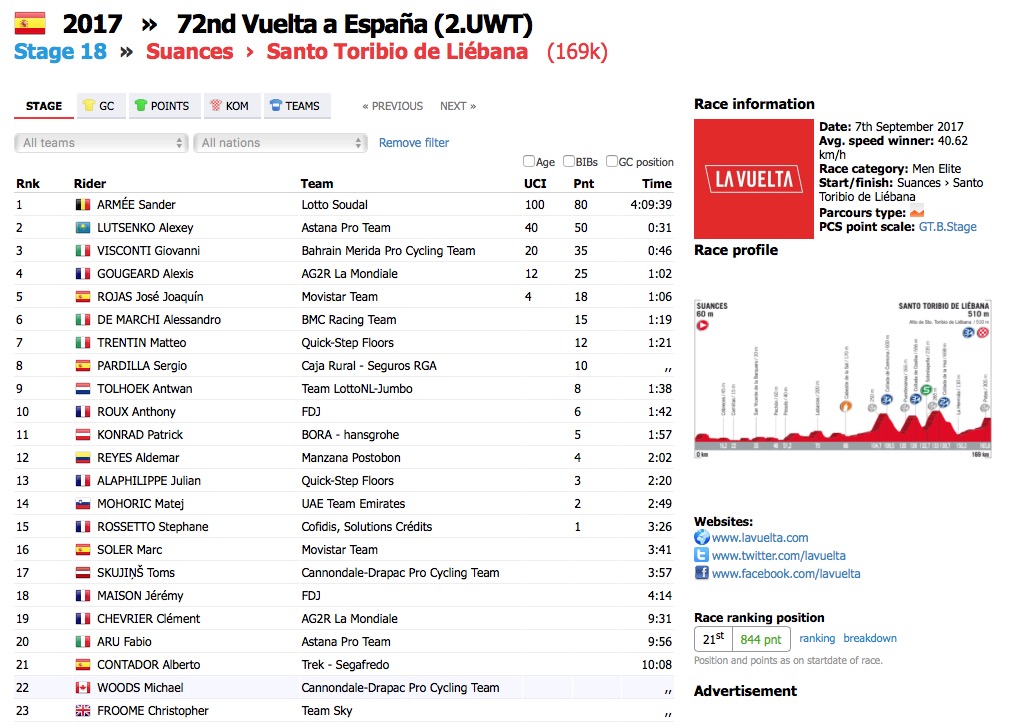 I can’t see any major illness and agree with  Bradley Wiggins who describes Chris Froome salbutamol affair as ‘a mess’ and claims Wada need more investment.

Something needs reviewing massively. I don’t think WADA have a massive amount of money, they need more investment. They were set up 20 years ago and their rules were probably written then, so perhaps they need to be re-written. But to really combat doping in sport and the more secret ways people are finding to dope in sport they need more money and funding.

And who has finally cleared the case – the WADA or the UCI?

Related posts: Detecting repoxygen infection | A new analysis method for blood doping | When will they ever learn? | So did you also get your DNA typed at 23andme? | When controls are no controls |