The Heinsberg study made headlines again this week, as according to a not further specified source the authors allegedly missed more deaths after the study period (which I suspected aready 6 months ago from an analysis of local obituarities).

Interestingly, the Streeck study had not been pre-registered although this is being a standard procedure recommended by the ethics committee (the LEK certified the Gangelt study on March 24).

Funny to see that there is now a third version of the acknowledgments . Comparing now the second (May 5 uploaded version) and third version (June 4 Nat comm) it looks like a lot of name-dropping although Streeck still omitted Kai Diekmann. 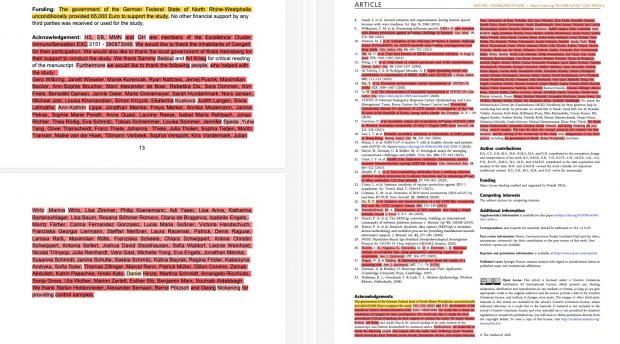 I did not spend so much time on the most recent version but found large differences between the qualified anonymous reviewer #1 (who even discovered the DRKS issue) and the bored reviewer #2.

As there was a discussion in Germany if results have been “ordered in advance”, the answer to the question “Was there a statistical analysis plan (SAP)?” is being the most interesting part.

In my translation: “We had no plan but were very clear about the result”.

Related posts: The Gangelt Study | Science projects, glue projects | An editor is one who separates wheat from chaff and then prints the chaff | New psoriasis gene would have been missed by testing linkage only | Materials and Methods |