Science has an interesting paper that relates to an earlier post here and a central question in immunology. How do T cells differentiate int both short-lived effector cells (that combat infections) and long-lived memory cells.

We show that a dividing T lymphocyte initially responding to a microbe exhibits unequal partitioning of proteins that mediate signaling, cell fate specification, and asymmetric cell division. Asymmetric segregation of determinants appears to be coordinated by prolonged interaction between the T cell and its antigen-presenting cell before division.

So, at least for Listeria antigen, it may look like this 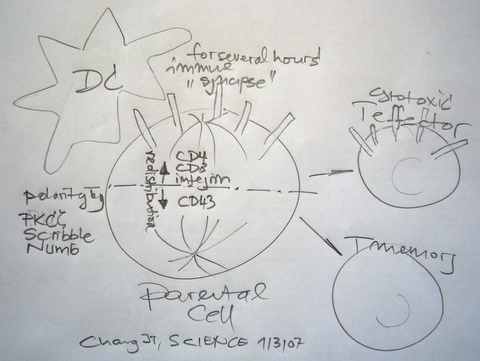