WouldnÂ´t it be nice to have also a CTRL+Z action in the laboratory? For example when you have confused pellet and supernatant during pipetting? Biology at least seems to have some kind of undo action – see a series of nice papers in Cell Research. ItÂ´s not about demethylation of the parental genome, it’s about stopping and rebuilding the zygotic transcription program during the first meiotic division (that creates the haploid set of chromosomes that will be passed to the progeny).

At present there are 3 hypothesis around, how transcription is being silenced – simply by the speed up of the cell cycle, by active inhibitory (transcription) factors, or the passive deficiency of critical factors. Sun et al. now show that there is a genome-wide disscociation of chromatin factors leading to a naive state in preparing the new life cycle. Critical transcription factors and regulators remain separated for a prolonged time period and become reassociated only after pronuclear formation. It is still unclear if the second or third hypothesis fits best this process as the absence of even 1 essential transcription factor can inactivate transcription. Deletion of TBP for example will inactivate both PolI and PolII; TBP is found to dissociate among other factors.

Only a couple of structural proteins remain bound persistently (HP1alpha, HP1beta, TOPIIalpha and AcH4, with acetylated histone 4 as a positive control. Of course methyl-binding proteins, topisozymerases, and other heterochromatin binding stuff is required for normal chromatin structure where it would be nice to know which of these remain bound during this reprogramming step. So, this looks more like a reinstalling the OS than a simple undo action.

Thanks and good bye to all guest readers of the science week.

No idea, what to write in your next scientific paper? Use the random medical news for some ideas. Here are also some expressions ready for cut & paste. Or you may want to go directly to SCIGEN (thanks to Christine for that link). 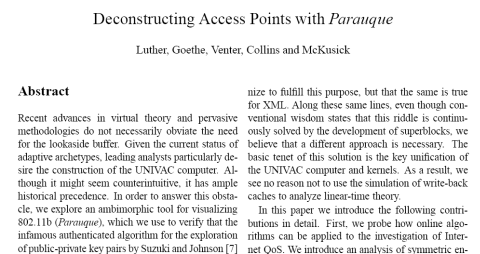 This page took 0.134 seconds of computer labor to produce. No computers were harmed in the making of this page. Some browsers whose name starts with Internet may be though (from Matt s blog).

Peer review certainly plays a major role in assuring quality of science. There are many positive aspects of peer review (plus a few disadvantages like promoting mainstream). Systematic research on peer review, however, has been largely absent until 2 decades ago; after 5 international conferences on peer review there is now also the WAME association of journal editors. Over the years, I have experienced the “cumulative wisdom” thrown at my own papers and of course developed my own style when doing reviews. Last week PLOS medicine published an interesting study who makes a good peer review:

These reviewers had done 2,856 reviews of 1,484 separate manuscripts during a four-year study period, and during this time the quality of the reviews had been rated by the journal’s editors. Surprisingly, most variables, including academic rank, formal training in critical appraisal or statistics, or status as principal investigator of a grant, failed to predict performance of higher-quality reviews. The only significant predictors of quality were working in a university-operated hospital versus other teaching environment and relative youth (under ten years of experience after finishing training), and even these were only weak predictors.

The first finding may be unimportant for non-medics but the second may apply to a larger audience. What I fear – and that is usually not mentioned in the current discussion – that the peer review system is slowly suffocating. The willingness to do this (unpaid & extra) work is going down as papers (at least in my field) are produced more and more an industrial mass production level. I am getting a review request nearly every second day while I do need between 30 minutes and 3 hours for a paper. So, less is more.

For a follow up go to sciencesque, a scenario how science in the post-review phase will work.

Most people think that human genes are static entities inherited from generation to generation. They may be right, there are no jumping genes in humans.

In 2000, when defending my thesis in epidemiology, I even had to answer the question of the faculty: “How can allergy have a genetic cause as most allergy cases date back only 1 or 2 generations?”. I explained the concept of susceptibility genes (that were always there) plus some new environmental risk factor (that came in only recently) and passed the colloquium.

Maybe this concept was not completely wrong. By today, however, I could offer more explanations – human genes are on the move and even within 2 or 3 generations. You may still wonder – are we talking about T cell receptor recombination? Yes, this may be a possibility, but not a really new one. More noteworthy are (1) abolished purifying selection (2) population admixture and (3) increased spike in mutations. These are all are independent paths that may combine freely.

Lets start with “abolished purifying selection”. At the beginning of the last century there were much larger family sizes and a much higher infant mortality. In Europe, mortality under the age of 5 has been about 250/1.000 live born children in 1900. It dropped to 50/1.000 around 1950 and is now about 5/1.000 – the effect of improved sanitary conditions, vaccines and antibiotics. Geneticists would describe it as a reduced selection – giving immediate rise to some variants in the gene pool.

The figure is Â© Copyright 2006 SASI Group (University of Sheffield) and Mark Newman (University of Michigan). Thanks to John Pritchard from the Worldmapper Team to let me post it here. Territory size shows the proportion of infant deaths during the first year of their life in 2002

Second, think of population admixture. This usually refers to the composition of a population by descendants of a few founders. Except for major migration periods population composition has been kept rather stable over centuries which can be nicely seen in humans living in isolation and having enriched some diseases – examples from Finland, Hutterities, South Tirol, East Adria or Iceand. With current decrease of admixture also the prevalence of diseases frequently seen in these populations will go done. However, some people even expect that other diseases will rise – as unusual allelic variants will meet other unusual allelic variants (which has not been balanced before). This theory is still vague but has interesting aspects that may be followed up.

A third possibility why human gene variants may change within short time comes with the ever increasing age of fathers at reproduction. I came across this only very recently by a paper of Ellegren. With each additional year of the father the number of pre-meiotic cell divisions increases – leading to a permanent (germline) increase of mutations. Most of these will be irrelevant but some may spike in random genes leading eventually to health effects. Crow asks: “Is this a problem? Surely it will be eventually, but probably not immediately”.

Human genes are therefore on the move, yea, yea.