We did not anticipate that the first 1,000 human genomes could be such quickly browsed ;-) but this is what the project website says. By today 4 individuals are on display and I wonder how it will look like with 996 more lines?? END_OF_DOCUMENT_TOKEN_TO_BE_REPLACED 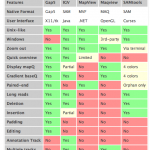 Heng Li has an excellent overview table on next generation sequence alignment viewers (as well as alignment programs) – thanks to TB for pointing me to that site. The Broad Institute has just bought another 30 Illumina Genome Analyzer – they now own 89 so the Broad people might have clearly a need for visualizing data.
The best choice is not easy to make – I am trying now the IGV in my lung sequence project. Annother interesting piece of software not listed by the Heng Li table is annoj that looks promising too, yea, yea.

I had to give several lectures last week explaining lay people how genomic studies work. I finally decided to compare the human DNA with the bible text – not so much in the sense of Collins’ language of God but the sheer amount of information contained in a single cell.
Here is just one slide of this talk – it seems that the comparison worked quite well – in particular the fact that if you can read a text you will not necessarily understand it. END_OF_DOCUMENT_TOKEN_TO_BE_REPLACED

Related posts: What people search for | Avoid boring people | You may fool all the people some of the time | Would you let 900 million people read your diary? | German Human geneticist warns against personal genomics |

Related posts: WordPress 2.1.x to 2.3.x upgrade – so many problems | Collins: Testimony on the threat of genetic discrimination | Who will survive? | In memory of Peter Lipton | How we are reshuffling our genome |

is an exciting question that will have a large disease relevance. I think this is not so much about cytogenetic abnormalities but the general understanding which genetic modules are recombining, e.g. are compatible in terms of function, and which need to be tight together. END_OF_DOCUMENT_TOKEN_TO_BE_REPLACED

A recent NIH study of families at risk for hereditary nonpolyposis colorectal cancer … revealed that the number concern expressed by participants regarding genetic testing was about losing health insurance, should the knowledge of their genetic test result be divulged or fall into the “wrong hands” … Unless Americans are convinced that their genetic information will not be used against them, the era of personlized medicine may never come to pass. The rest would be a continuation of the current one-size-fits-all medicine, ignoring the abundant scientific evidence that the genetic differences among people help explain why some of us benefit from a therapy while others do not.

WouldnÂ´t it be nice to have also a CTRL+Z action in the laboratory? For example when you have confused pellet and supernatant during pipetting? Biology at least seems to have some kind of undo action – see a series of nice papers in Cell Research. ItÂ´s not about demethylation of the parental genome, it’s about stopping and rebuilding the zygotic transcription program during the first meiotic division (that creates the haploid set of chromosomes that will be passed to the progeny).

At present there are 3 hypothesis around, how transcription is being silenced – simply by the speed up of the cell cycle, by active inhibitory (transcription) factors, or the passive deficiency of critical factors. Sun et al. now show that there is a genome-wide disscociation of chromatin factors leading to a naive state in preparing the new life cycle. Critical transcription factors and regulators remain separated for a prolonged time period and become reassociated only after pronuclear formation. It is still unclear if the second or third hypothesis fits best this process as the absence of even 1 essential transcription factor can inactivate transcription. Deletion of TBP for example will inactivate both PolI and PolII; TBP is found to dissociate among other factors.

Only a couple of structural proteins remain bound persistently (HP1alpha, HP1beta, TOPIIalpha and AcH4, with acetylated histone 4 as a positive control. Of course methyl-binding proteins, topisozymerases, and other heterochromatin binding stuff is required for normal chromatin structure where it would be nice to know which of these remain bound during this reprogramming step. So, this looks more like a reinstalling the OS than a simple undo action.

Thanks and good bye to all guest readers of the science week.

Related posts: (Re)programming adult into pluripotent cells | Reading behind the lines | Cell podcast with an interesting fact | Genes on the move | Towards a framework of SNP interaction |

Cell has a first podcast online. It features interviews with two of this yearâ€™s Nobel Laureates, Dr. Craig Mello and Dr. Roger Kornberg, as well as a talk to Dr. Paul Nurse about current funding prospects in the US ( “dont give up”). It is quite easy to hear that on my morning ride – and liked very much Craig Mello saying (please wind forward to 6:19) “the entire genome is probably described in some level” which is quite different to the prevailing junk theory. Yea, yea.

Related posts: Genomics of a single cell | The Rosetta stone and the genetic code | Nice to know | IL4 cluster revisited | A tragedy if you don’t feel pain |

Lets start a further workup of the evolutionary thread. With the complete human and chimp genome on our harddisks we are now able to compare genome sequence and genome activity of both species. A 2003 review by Sean Carroll summarizes our pre-genome knowledge about pan and homo lineages 6 Million years ago. The most interesting question is which mutations or genome rearrangements (Popesco 2006) are most relevant in the separation of lineages.

Neuroanatomy might have provided some clues of a larger frontocortex in homo sapiens although the detailed cytoarchitecture could be as relevant. Noise of neutral substitutions could have confounded previous findings. It is also not clear to me if expansions and contractions of whole gene families are even more relevant. We may also renember that most quantitative traits have a polygenic background.

In any case FOXP2 could be associated with speech and language disorders (Vargha-Khadem 2005) where another prominent gene was now found in the 49 regions that are different between chimp and human but otherwise conserved (Pollard 2006). This new gene called “HAR1” is even expressed in the developing neocortex making it a prime candidate for species differentiation. Is there anybody able to convince me that the 18 fixed mutations in HAR1 have indeed a beneficial effect on brain development? A “leading edge” comment in Cell argues that all substitutions are upgrades from weak to strong base pairing:

Curiously, this weak-to-strong substitution bias in HAR1 extends over 1.2 kb, a region far larger than HAR1 itself. Such changes which also appear to characterize the HARs as a group undoubtely serve to strengthen RAN helices against dissociation…

I would also like to mention that male humans share more identity with male chimps than with female humans, at least on a genetic level, yea, yea.

Even blogs have a half-life of less than 1 week. A new PNAS paper by Michael Oldham shows a more integrated view of human brain evolution by examining gene coexpression networks in human and chimpanzee brains. This seems to be another promising approach.

Related posts: Do not run after a cart that will not take you | Truth in science (and religion) | Paper cemetry (is La Sombra del Viento) | Alternative Impact Factors | False Memory |