I have no idea how 23andme got its name but the business model of this company seems to rely on a rather haploid view of the world.
I had the pleasure this weekend to listen to a talk by Joanna Mountain(senior research director at 23andMe, the company that was founded by Googles Sergey Brin‘ s wife Anne Wojcicki). For whatever reasons Brin released on Sept, 15 his Alzheimer risk. 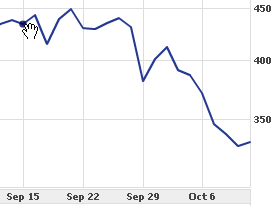 Maybe he should not have eaten his own food? Analysts said that they did not believe that this news will have a negative impact on Googleâ€™s shares although I am not sure if you look at the figure on the left (I admit this is hard to judge given the current situation).
So lets continue with the hard facts – the annoying point is not so much with the wet technology as 23andme even outsources DNA extraction from saliva as wells as Illumina 550K chip hybridization and even let you pay only $399 which is a fair price. My concern comes more with the poor moral and scientific basis “for educational purpose only” and how the genome annotation is being marketed at the moment. Given the impressive list of board members ((like a former ASHG president), the annotation quality is rather poor (and Joanna’s slides are clearly outdated compared to the data on their website – she said the clinical reports are 10, while the website says 23). She also referred to SNPedia as junk data while showing on her slides a web-based report form that includes many lactose intolerance, alcohol flush reaction, bitter taste recognition and the famous ear wax type!
I counted 6x times “fun” in her talk and 3x “game” while referring at the same time to the prediction of serious genetic risks!! This is even acknowledged by a second opt-in on the website for more severe disease predictions like CF or Alzheimer: and there is no physician at 23andme that helps you out of this ghost train of wrong claims, poor statistics and simple data errors. 23andme really introduces a 5 ***** star system for reliability of their (literature based) individual prediction, no hotline, no free phone, no board, nothing.
You can even share your data (if the database is been set up correctly!!) with other people. She has 10 family members in the database – so she may even receive now an email now from her mother as a new GWA now increases her breast cancer risk???
I would also be very interested to know which 2 out of the 1000 asthma studies are used for prediction of the asthma risk? There is definitely no gene known for late onset disease! When she pointed to chromosome 6p21 asking the audience about the genes there, the response of the audience was somewhat like asking a group of FIDE GMs about the number of squares of a chessboard.
Although she referred several times to her background in population genetics, the 23andme view of a world is just limited to 3 populations: Caucasian, Africans and Japanese/Chinese (adapting more or less hapmap “goggles” branded “Palin”). The talk concluded with the question

When is a reported association between a SNP and a phenotype robust enough for presentation to consumers?
A1: NEVER
A2: ALWAYS
A3: CONSISTENCY AND TRANSPARENCY CRITICAL

BTW the above cost estimate of 399$ may be wrong given the following presentation by a German assurance expert who said that the costs of the life insurance may be multiplied with the risk estimates for a disease (Armstrong AJHG 2003; 120A: 359): If I would need a new life insurance for 1,000€ annually (and given the risks that I would have to report now any 23andme consultation) that would drive my costs up to 3,000€. Over the course of 20 years, the 23andme report would therefore cost me 40,399€.

This year the personal-genomics company 23andMe, based in Mountain View, California, announced two rounds of lay-offs, lost one of its two co-founders and announced a series of product and price restructurings. “There’s no clinical trial supporting the value of these results, so it’s really recreational genomics,” Ro says. Large academic centres, not consumers, will find value in the rich genetic databases; 23andMe has tried to move into the research market, but because its data come from a self-selected customer population their value is limited, he says.