We had a major discussion right before our 2010 paper where I argued that rare variants should have been included into our asthma/allergy/dermatitis GWAS. Ten years after there is now a nice paper using massive exome sequencing that finally includes them.

It seems that the respiratory tract isn’t so much influenced by rare gene variants but that there is a strong effect in  the immune system.

And there is another interesting fact.

…Surveying the contribution of rare variants to the genetic architecture of human disease through exome sequencing of 177,882 UK Biobank participants …if we look at the …. European population who are carriers of a filaggrin (FLG) PTV, we find those carriers have significantly higher risk for well-known associations, such as dermatitis  … and asthma … Concomitant increases in vitamin D levels suggest … increased sensitivity to ultraviolet B radiation.

So far, I have only assumed an asthma/allergy priming effect of oral vitamin D in the newborn gut. This paper now argues for an increased vitamin D sensitivity also in the skin of  FLG dermatitis patients which is interesting given the largely contradictory data of serum vitamin D and atopic dermatitis. Maybe dermatologists should focus their research more on skin and local vitamin D turnover? 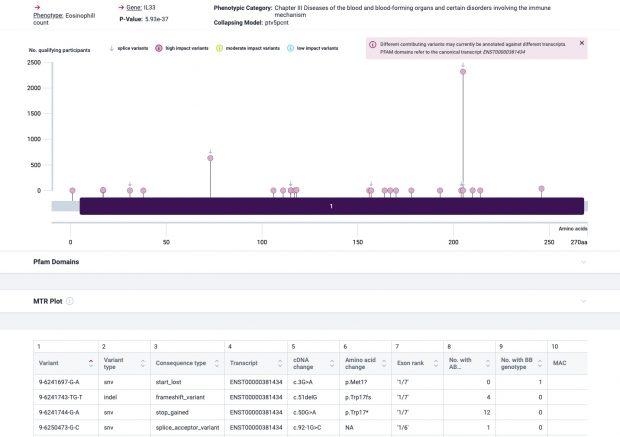 There are not too many carriers of this variant by the sheer amount of 177,882 participants. We nevertheless know already something about the seven IL33 splice variants since 2012.

So I did a sequence match to compare the new finding with these older publications.

The Astra UK Phewas at least confirms the Iceland paper above

So it is basically a rediscovery meaning that we reached saturation.

Related posts: Fabrics for atopic dermatitis | Why do we have so much atopic dermatitis? | CD 14 now also on the vitamin+allergy list | Is there an association of CARD15 variants with allergy? | VDR variants are associated with asthma |