Lets look at the Wikipedia definition

Berkson’s fallacy is a result in conditional probability and statistics which is often found to be counterintuitive, and hence a veridical paradox. It is a complicating factor arising in statistical tests of proportions. Specifically, it arises when there is an ascertainment bias inherent in a study design … The most common example of Berkson’s paradox is a false observation of a negative correlation between two positive traits, i.e., that members of a population which have some positive trait tend to lack a second.

The original example is developed using the example of an hospital based group of patients. The only thing to know is that diabetes is a risk for cholecystitis in the general population.

Basically some strong selection bias in a subgroup not only defined by the trait of interest but by some other trait as well?

My example here is with families who are living on farms. Since around 1960  [Leynaert 2001] it is known that farming families have less allergy, an effect that I found back in 1989 and that is most likely a healthy farmer effect.
This selected farm population has a lower allergy prevalence and of course their children will also have less allergy. All the negative correlations (that are interpreted as protection) with endotoxin, microbiome, etc could be caused by this bias (Linneberg 2005). The observation will also be even replicated as the same selection criteria are also present in the replication sample.

Quite some time passed already since my last post (to be exact, more than 5 years) but now there are good news. The FDA issued a warning letter on the 22nd

… The Food and Drug Administration (FDA) is sending you this letter because you are marketing the 23andMe Saliva Collection Kit and Personal Genome Service (PGS) without marketing clearance or approval in violation of the Federal Food, Drug and Cosmetic Act (the FD&C Act) … However, even after these many interactions with 23andMe, we still do not have any assurance that the firm has analytically or clinically validated the PGS for its intended uses … Therefore, 23andMe must immediately discontinue marketing the PGS until such time as it receives FDA marketing authorization for the device …

The response is quite flimsy. Yes, there may be negative side effects of genetic testing and of course tests need to validated first. Slate may be correct that the FDA’s battle with 23andMe won’t mean anything in the long run but now at least, we are set back to science, yea, yea.

There is a new Edge Special Event about the Hillis’s question “WHO GETS TO KEEP SECRETS?”

The question of secrecy in the information age is clearly a deep social (and mathematical) problem, and well worth paying attention to.
When does my right to privacy trump your need for security?; Should a democratic government be allowed to practice secret diplomacy? Would we rather live in a world with guaranteed privacy or a world in which there are no secrets? If the answer is somewhere in between, how do we draw the line?

With all the wikileaks hype over the last year, the Edge essay is la perfect supplement to our last paper about anonymity in genetics – check out BMC Ethics “Caught you: Threats to confidentiality due to the public release of large-scale genetic data sets“.
What we didn’t mention in this paper are more complicated statistics like stochastic record linkage – more on that in RJournal 2/2010, p.61 ff 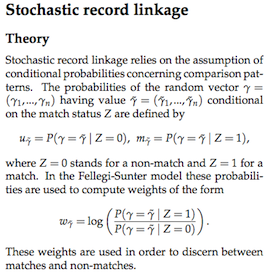 is my favorite quote of a scientist – the late Frederick Sanger. I would so much love to get an interview with him.

or from a loop over all traits

It’s an exceptional good science book – Cancer, The evolutionary legacy – by Mel Greaves. Having written last year a grant application about resequencing of lung specimens (and more recently a correspondence letter about the lung cancer genome that updates our earlier 31 events to 22,910) END_OF_DOCUMENT_TOKEN_TO_BE_REPLACED

There seems to be a GWAS repository that has an entry of an asthma study otherwise not known in the biomedical literature and – as see on the screenshot -results tables are empty. END_OF_DOCUMENT_TOKEN_TO_BE_REPLACED

(c) for the first part is by the Medawar & Medawar in “Aristotle to Zoos“.

Over and over I am flooded with emails like

Let me introduce myself to you. I am xxxxxxxxxx, completed M. Sc Micro Biology. At present I am working as a research Fellow in Centre for xxxxxxxx, xxxxxxxxxx, India. How are you sir? I am your student. How can I mean, in January 2005 you come to India. At that time your engaged some class to us in xxxxxxxxx College, Axxxxxxxx. Presently I am working on Genetics of â€œxxxxxxxxxxxxâ€ under the esteemed guidance of Dr. xxxxxxxxxxx and Dr. xxxxxxxxxx. I am very much interested to do PhD. Herewith, I am sending my curriculum Vitae as attachment to your kind perusal. I assure you, I shall work with at most devotion and sincerity to give you satisfaction and also I am confident that I can lead PhD successfully with the experience I gained during my research work at xxxxxxxxx. Given a chance I will prove my caliber.

END_OF_DOCUMENT_TOKEN_TO_BE_REPLACED

Just found at the HUM MOLGEN bulletin board a link to Fable, a new automated literature extraction system. Fable is pretty fast and can output gene lists. Sure, the screenshot below shows only those genes that I mentioned in the abstract, but this is not so bad as the most important genes wil be placed there.
BTW, the number of reviews on asthma genetics have been falling to less than 50% after closing the Asthma Gene Database. Maybe this new service will help to re-establish the former output of reviews ;-) yea, yea.

If I would ever find the time, I would write a book on the “self”. Inspired by the Eccles/Popper book that I bought as a student, I always wondered how different the self is being defined in sociology, psychology/psychiatry, philosophy and theology.
As my current focus is more on genetics and immunology, I found a paper by Francisco Borrego on the “missing self” quite interesting as it highlights the genetic self is determined mainly by MHC class I molecules, where only NK cells transfected with H-2Dd were able to confer resistance for being self-attacked. It would be nice if other disciplines could also provide such simple answers, yea, yea.

I have another suggestion: Zfp608 protects mouse mothers against immune-mediated attack by fetal cells.

Is there also a “digiself“?

Our identity has, for many years, existed quite independent of our physical incarnation in government, financial and other institutional databases. We are not real to the bank or other authorities unless we can produce something that links our physical self to our “real identity” in their database. We have many versions of this digital identity – or digiSelf, as I like to call it – spread among many databases, each with its unique characteristics, and inferred behaviours. Each one is more real to the institution – and ironically, to the people in that institution – than our physical self, what we consider to be our real self.