It is always nice if you are being cited after some years ;-)
There is an important article that I have been reading this morning “Missing heritability of complex diseases: case solved?” Emmanuelle Génin is correct by questioning the statistical models underlying our heritability measures.

It is therefore possible to directly quantify the contribution of these genetic variants to phenotypic variance and measure what is called “genomic heritability”. Briefly, the idea is to infer the proportion of variance that can be explained by a linear regression on a set of markers used as explanatory variables.

This genomic heritability seems to be in fact a poor mathematical representation of a biological trait. >1000 hits in >500.000 individuals, does that make any sense at all in terms of biology?

More recently, it was proposed that rather than polygenic, the genetic architecture of common diseases could in fact be “omnigenic” with mainly all active genes affecting every complex traits.

which is fatalistic but justified IMHO. But there could be solutions. We proposed undetected rare variants

When adding these rare and low-frequency variants to the common variants associated with height, 27.4% of the variation can be explained.

while the results are not impressive. We proposed also structural variants (CNVs), but again no convincing effect so far. Allele dosage? Disappointing . GxE, interaction with genome background? Difficult, highly complex. Epigenetic environmental influences ? Sure but where to start?

The “GIGO (Garbage-In Garbage-Out) syndrome in genetics” as coined by Emmanuelle Génin is one of the main reasons why I mostly dropped out of the field.

We believe that the “missing heritability problem” is an ill-posed problem. Solving it by refining over and over again statistical models derived under the “polygenic paradigm” or using more and more sophisticated sequencing machines will not answer the fundamental and biological question of why that individual is affected by the disease and that other individual is not.

My last sentence would be: Phenotypic correlations between relatives determine heritability. So we should go back to family studies if we want to explain heritability.

Using data described in Science Magazine (basically 4% of all published books) I constructed a plot showing an update to the 100 year old mystery why we get allergic to certain substances. 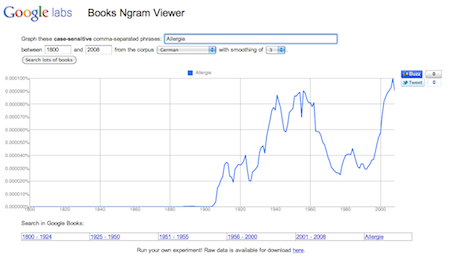 We just published the largest study so far of human serum cytokines providing for the first time reference values.

Dr. Zamel, one of the PIs of the Tristan da Cunha study pointed me today to the interesting 30 min BBC documentation online at Allergy Canada

Allergy Island is an exclusive documentary on the history of asthma in Tristan da Cunha and the discovery of the gene related to asthma in that highly inbred community by the expedition that I did in 1993. I went in May 2008 to Tristan da Cunha with the BBC crew to film both parts for the entire month.

There seems to be a GWAS repository that has an entry of an asthma study otherwise not known in the biomedical literature and – as see on the screenshot -results tables are empty. END_OF_DOCUMENT_TOKEN_TO_BE_REPLACED

It’s a pleasant experience to write something that is being translated afterwards into so many languages afterwards. It is, however, irritating that this dissemination is irrespective of what I (and all second and third hand journalists and translators) understand of this curious world.

It seems that CEA just published my rather critical view of the recent ORMDL3 association paper. My letter had been first submitted to “Nature” but rejected after review.
A rebuttal seemed to be necessary as the authors repeatedly highlight ORMDL3 as a new asthma gene – in the printed Nature paper, in the Nature podcast and in the accompanying press releases. They even continue with reviews saying that

Completion of the human genome sequence and the advent of genome-wide association studies have resulted in the identification of two novel asthma susceptibility genes, ORMDL3 and CHI3L1, in the past year.

END_OF_DOCUMENT_TOKEN_TO_BE_REPLACED

A new abstract at the recent ATS congress now clears the 2007 controversy between the Camargo and Gale studies on the effect of vitamin D: Wheezing is not asthma (as the atopy component is missing?). END_OF_DOCUMENT_TOKEN_TO_BE_REPLACED

Just for curiosity I am collecting a list of allergy genes that are vitamin D dependent. The list is already rather long but now there is a prominent addition: CD14. Known as asthma gene for many years the vitamin D dependency isn’t such clear. A clever analysis, however, now shows that there is an intermediate step involved END_OF_DOCUMENT_TOKEN_TO_BE_REPLACED

What do these guys offer here? END_OF_DOCUMENT_TOKEN_TO_BE_REPLACED