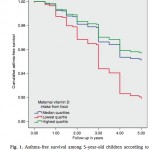 A new study of 5 year old children relates their current allergy symptoms to LOW maternal intake of vitamin D from food (which is strange within the context of current cohort studies that show a INCREASED risk by vitamin D supplement use).

As this is a diabetes study, the sample is highly biased (a 15% subset of the population is HLA-DQB1 02/0302 heterozygous and DQB1 0302/x positive). 7% of the original selected individuals participate in a follow up while another 1-2% are lost there due to insufficient data. So is this sample representative to allow any conclusion?

Second, the authors find effects with dietary vitamin D which is usually less than 10% of the overall source. So is this study really about vitamin D? As the authors do not find any direct effect by vitamin D supplements, this study may be just about fish eating which increases 3,4fold between “vitamin D exposure” groups (together with other factors like socioeconomic status).

Third, there is no information about vitamin D supplementation in the newborn period – the most relevant question at the moment. The authors omit this from the analysis (and even from the discussion which disqualifies the paper).

… We lack knowledge on the mechanisms by which vitamin D [works].

I agree, this is another example, how dangerous it is to misuse studies for unintended outcomes and to reason from insufficient data. BTW Why are there only three quartile groups in the figure?