There is an interesting paper on brain drain Why does the U.S. have the best research universities? Incentives, resources, and virtuous circles?

A demand for denominational sorting drove the creation of the nine American colonial colleges. For example, Massachusetts Puritans created Harvard to produce what they saw as a theologically sound education … Connecticut-based Puritans created Yale because they perceived that the Harvard of Massachusetts-based Puritans was too physically distant (in addition to too religiously liberal)

The authors attribute the following U.S. success to “reforms that began after the Civil War and enhanced the incentives and resources the system directs at research” which may be true.  Maybe the overall strategy of the paper is questionable, looking at biographies of Nobel prize winners  only- nevertheless the trend is clear that German impact is decreasing already in 1920 – while I always thought of an exodus of scientists only after 1933. 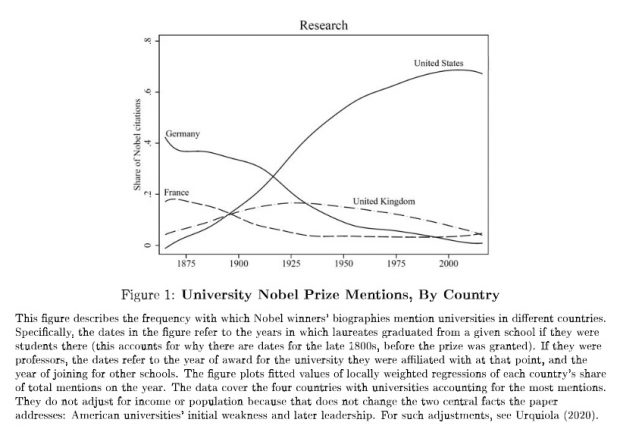 The U.S. does not spread so much money to  various non-university based “Großforschung” organisations and there is much more private sponsoring of U.S. universities, so monies are more concentrated.

Higher salaries, lower teaching, and enhanced laboratory space illustrate some ways in which professors’ compensation began to reflect research performance. Furthermore, this period saw the emergence of tenure, a salient reward for performance.

The emergence of tenure seems to be important if you can make your living from your work and do not need to start campaigning like #IchbinHanna in Germany.

Related posts: Der chinesische Menschenversuch | Froome, salbutamol and the WADA | More human embryos edited | Is there an association of CARD15 variants with allergy? | Can’t believe in a TCRA association (at the moment) |

For everybody who wants to follow up the most recent discussion about allergy promoting effects of vitamin D here is a short summary. The Harvard group basically wrote three articles that were immediately contradicted. The comment on the first article in JACI was by a NIH researcher END_OF_DOCUMENT_TOKEN_TO_BE_REPLACED

Phantastic. Moreover, the peer-review system is broken with top PI’s getting away with publishing high impact poorly reviewed rubbish. If more non-peer-reviewed research becomes more prominent it will hardly make a difference to quality and can overall only be a good thing.

commenting on the recent decision at Harvard to automatically publish all papers by its Faculty of Arts and Sciences on the university’s website (except there is a waiver). I am waiting for the first German university to follow; effectively since January 2008 we get all our ordered documents on paper again for copyright reasons.

Related posts: Open peer review failed | Peer to peer publication | Every rule can be broken, but no rule may be ignored | Less is more | Quod licet Jovi not licet Bovi |

Maybe you donÂ´t want to wait until Google Scholar has it; maybe you are interested in a higher quality: Here is the web address digiwubu.gdz-cms.de at the Niedersächsische Staats- und Universitätsbibliothek Göttingen where I once studied theology.
There should be no problem to scan any book published before 1900, however you can ask also for books published later than that date. Costs will be are 0.25 € per page plus 5 € for handling and shipping a CD.
“Google Books Library Project” is currently scanning in Harvard, Stanford and Oxford >15 million volumes – German scan factories are in Göttingen and Munich. Yea, yea.