The recent encyclopedia article about the hygiene hypothesis seems to be well written. At least on the first instance … in reality it is more a novel than a scientific review.

For many years already, the hygiene hypothesis has been called an outdated concept; various times it was revised and transformed, and finally it gave birth to novel hypotheses.

In other words, the hypothesis has been rejected for being wrong . Even many revisions did not change that. There seem to be only one proven fact – the obsession of some authors with hygiene and nouvel Rousseauism.

Anyway, the hygiene hypothesis has promoted radical rethinking of infections, microbiota, and coevolution of mankind and microbes.

There is nothing radical in backward thinking. We still carry tons of microbes, freezer and antibiotics only did some qualitative but not so much quantitative changes,

With the advent of novel high-throughput sequencing technologies the human microbiome, which is sometimes called the ‘forgotten organ,’ has attracted much attention and is currently being implemented in a wider concept of self-foreign relationship, which may even include recognition of the nonmicrobial nonself as a vital stimulus to a well-developing immune system.

Given the many molecule classes regulating immune functions across individuals such as short RNAs, the hygiene hypothesis may eventually come back as a surprising explanation of the phenomena evoked by crowding, day care, sibship size, orofecally transmitted diseases, and respiratory infections.

Why that?
A comeback of the hygiene hypothesis by short RNA?
The listed phenomena are not intrinsically related, but are occuring only at the same time scale.

Even the old birth order effect might be rediscovered as epigenetic programming someday. Admittedly, these notions are entirely hypothetical, but without hypotheses, proven or not, science hardly advances.

So if David Strachan’s birth order effect would be really caused by  epigenetic programming – why would that be related to hygiene at all?

Science is is not so much about proven or unproven but about reasonable and non reasonable hypotheses.

Most recently, I came across of another euphoric hygiene hypothesis review and wonder how this could ever happen. The evidence here is mixed and largely ambiguous.
Probably it would be best to follow some basic journalistic rules as summarized in the online “Verification Handbook for investigative reporting”

As with the verification of user-generated content in breaking news situations, some fundamentals of verification apply in an investigative context. Some of those fundamentals, which were detailed in the original Handbook, are:

– Develop human sources.
– Contact people, and talk to them.
! Be skeptical when something looks, sounds or seems too good to be true.
! Consult multiple, credible sources.
– Familiarize yourself with search and research methods, and new tools.
– Communicate and work together with other professionals — verification is a team sport.

Journalist Steve Buttry, who wrote the Verification Fundamentals chapter in the original Handbook, said that verification is a mix of three elements:

– A person’s resourcefulness, persistence, skepticism and skill
– Sources’ knowledge, reliability and honesty, and the number, variety and reliability of sources you can find and persuade to talk
– Documentation

Related posts: An epidemic of nonsense | Less than one mistake in every 6 million deliveries | We need INDEPENDENT replication | How to get closer to the target | Science flies |

13 € for a paperback, this is “An Epidemic of Absence. A new way of understanding allergies and autoimmune disease”. It is written by Moises Velasquez-Manoff , a journalist otherwise working for the “The Christian Science Monitor”. As his online bio reports “he dreamed of writing novels”. I would wish he would done so.

The outset is rather clear – Velasquez-Manoff wants to find a cure for his own autoimmmune disease. While this may be a legitimate justification for collecting information about a given topic, the method by Velasquez-Manoff is not. At a first glance, it looks like a serious book, well written, interesting facts presented in a coherent manner followed by numerous references. Maybe that made such an impression on the (numerous) positive reviewers. Maybe all the positive reviewers are experienced science journalists that judged by the overall impression plus some common sense plus some specific knowledge. But, Velasquez-Manoff did never hear the other side (on p.310, he even admits who has read and commented on sections of the manuscript: exclusively scientists in favor of the hygiene hypothesis). To recognize that you need to be a scientist – journalists would not notice that.

I compiled a long list the errors but feel now, that it would be too time consuming to write that down here. As far as it concerns me (p. 99) there was no grant to win in Munich as the study Velasquez-Manoff is talking about was a commissioned study. And sorry (p.100) I wrote the full grant application comparing East and West Germany children and did large part of the field study. Furthermore, I am not convinced (p.101) that the East West German differences ever supported the hygiene hypothesis, it is something different. And it was not in 2000 (p.102) that someone published on day care (p. 102), we wrote that already in 1999. Audiatur et altera pars, yea, yea.

There is a new review on vitamin D and allergy.
Reading that piece carefully, I fear that expertise in one area does not guarantee END_OF_DOCUMENT_TOKEN_TO_BE_REPLACED

or briefly vitamin D3. There seems to be another vitamin D /allergy abstract at the forthcoming EAACI congress from the KOALA study. The authors find

Risk for AD was highest for children in the fourth quintile of maternal 25(OH)D level [adjusted odds ratio (aOR) 2.08; 95%CI 1.07-4.03] compared to those in the third quintile; P for trend over the quintiles 0.03]. END_OF_DOCUMENT_TOKEN_TO_BE_REPLACED

Related posts: Not all that wheezes is asthma | Vitamania | Another rediscovery of the vitamin hypothesis | More retro vitamin D | Vitamin D as an adjuvans to specific immunotherapy |

This seems to have a long tradition going even back to Plato’s republic. Sure – the demonstrated fierceness covers only the crudity of the growing identity. END_OF_DOCUMENT_TOKEN_TO_BE_REPLACED

Related posts: Do not retire retirement please | Craving comes from the insula | Do you know … | Time to give Blackley the credit he deserves |

Blood has now also an account on the vitamin hypothesis. 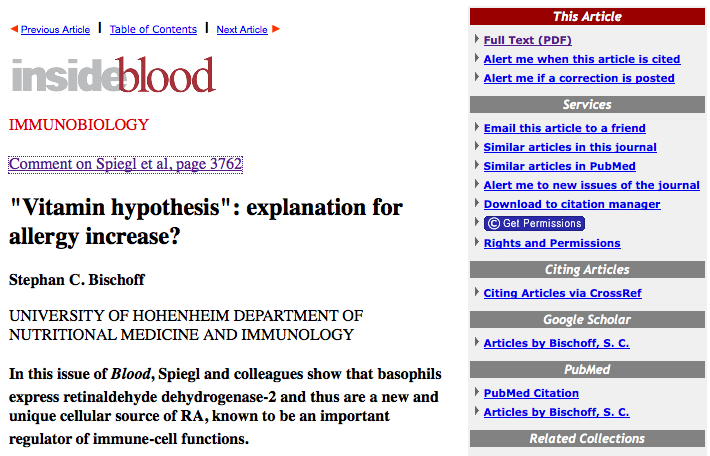 Following some earlier descriptions in Reed 1932, Selye 1962, Wjst 1999 and Wieringa 2008, the discovery frequency seems to increase – a good sign for some progress. Bischoff writes about vitamin A where we have only some limited evidence.

An (anonymous) reviewer of our forthcoming EJHG paper on IgE and STAT3 pointed me towards a JNCI paper that has a nice supplement – an excel sheet to calculate the probability that a positive report is false. It basically relies on (i) the magnitude of the p-value (ii) statistical power and (iii) fraction of tested hypothesis. While we certainly know (i) and (ii), (iii) is always hard to know with many datasets including hundreds of traits that allow indefinite numbers of subgroups. Are you really interested in a new paper about “An African-specific functional polymorphism in KCNMB1 shows sex-specific association with asthma severity” that encompasses 1 of virtually 100 ethnic groups; 1 or virtually 25000 genes; 1 of 2 sexes; 1 or virtually 50 asthma related traits, yea, yea.

I am currently doing some historical studies if the vitamin hypothesis fits also the temporal relationship of allergy prevalence. While ordering RKI files for my next trip to the Berlin document center, I found that farming and lower allergy sensitization is known much longer than I anticipated. END_OF_DOCUMENT_TOKEN_TO_BE_REPLACED

Related posts: Supersize me and the fake food hypothesis | Nothing makes sense except in the light of a hypothesis | Allergy and DC antigen processing: vitamin versus hygiene hypothesis | Human breeding | Truth in science (and religion) |

…. why the language of the internet is English and not French? It is an interesting hypothesis that the yellow fever which decimated Napoleons troops in Santo Domingo was a crucial factor in the decision to sell Lousiana in 1803. Although German was also a science language around 1900, it certainly became discreted by two world wars. Yea. Yea.