I  found only one relevant blog post about PDFs produced by scientific publishers.

Although PDFs are the main formal output nowadays (no more “papers”) there is basically no standardization which meta data should  be included in scientifc PDFs. It’s largely due to the software in the production office what’s in the PDF document — a largely underused resource. 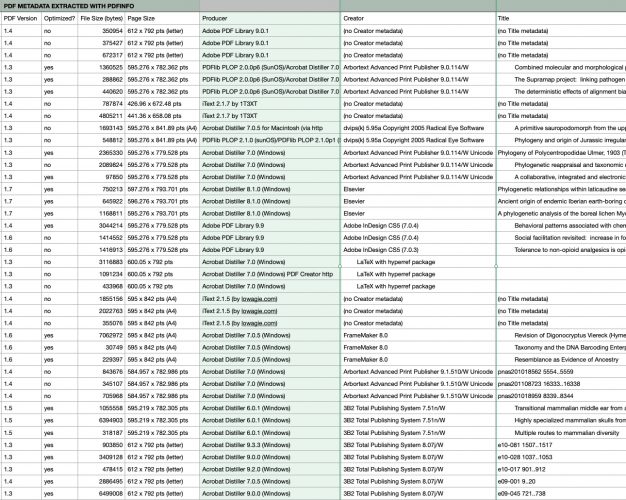 This is at least my experience when working on an image duplication pipeline in scientific papers.  But test it yourself ….

Related posts: Image modification in scientific publications: 10 rules for acceptable use | I am very astonished that the scientific picture of the real world around me is very deficient | How much wisdom is there in the scientific crowd? | Putting ‘scientific’ on a bottle of tonic often just a money-making scheme | Delusion or poor scientific hypothesis |

I frequently find the PubPeer excuse of compression artifacts in doctored images.

So lets have a look at that issue using the jpegoptim (manpage) and also jpeginfo (manpage). These are the usual effects

Now let’s have a look at the compression artifacts in descending quality (BTW this also good exercise for the upcoming 125kB Content Upload Filter, I am therefore adding  filesize also)

END_OF_DOCUMENT_TOKEN_TO_BE_REPLACED

I am summarizing here some rules what consists of acceptable image use in scientific publications (Rossner 2004). Pioneers in the field have been the Journal of Cell Biology (J) but also Nature (N) and EMBO Press (E). Here are 10 rules:

These are general rules only.  Specific rules exist for electrophoretic blots and microscopy (N). Additional points

Related posts: 10 simple rules | John Bostock – the first scientific description of allergy | Do we need scientific journals at social networks? | Resize and preserve image orientation before upload | A biased scientific result is no different from a useless one |