We probably all agree that a publication bias against negative studies will severely distorts our opinion. To repeat an earlier Nature letter

Why negatives should be viewed as positives … This filtering of results undoubtedly biases the information available to scientists (see, for example “Null and void” Nature 422, 554â€“555; 2003). And communication is at the heart of science.

Here is an email that I received from the editor END_OF_DOCUMENT_TOKEN_TO_BE_REPLACED

The Just Science 2008 will start next week – and here is my last chance to say something non scientific: Science is a method, that has certain prerequisites, works under certain conditions while using techniques with strengths and limitations and is leading to certain conclusions evident to some but not all humans. Needless to say that from a protestant / Lutheran view that there are other ways to explain a phenomenon while providing even extra dimensions like giving an ethical justification.

Haldane / When I am dead / 1928: I am not myself a materialist, because, if materialism is true, it seems to me that we cannot know that it is true. If my opinions are the results of a chemical processes going on in my brain, they are determined by the laws of chemistry, not those of logic.

DonÂ´t confuse me with Science of the Surf END_OF_DOCUMENT_TOKEN_TO_BE_REPLACED

Skills, everyone has quids.
Talents, toys of the kids.
Seriousness makes a man,
dilligence the genius span.

sorry for my translation ;-)

Here is a little tale that could have happened every day. An author sends a major paper to a major journal. The major journal has a major editor that asks other major reviewers before writing a major email. END_OF_DOCUMENT_TOKEN_TO_BE_REPLACED

I liked that quote from Professor Lipton in a recent essay about the “World of Science” where he repeats his earlier “Kuhn is Kant on wheels“:

Like Kant, Kuhn held that the world described by science is a world partially constituted by cognition. But whereas Kant held that there is only one form the human contribution could take, Kuhn argued that the contribution changes as science changes. Kuhn is Kant on wheels.

I am more attracted by an objectivist than a constructivist view — where the world has its own structure that is only revealed by science (at least in part) and religion (also in other parts). As I am currently reading Klemke – probably one of the best books in the field – maybe that will change my mind? Nay, nay.

First monday has an interesting paper on the 100 most visited Wikipedia pages for the period of September 2006 to January 2007 (Wikipedia is the ninth most visited site in the U.S. with 43 million visitors). The crystal search link in the paper does not work but the table reports that science ranks at place 5 – not too bad.

Sciencesque has noticed it first: T shirts at Biomed Central for sale. Do your really want that shirt? 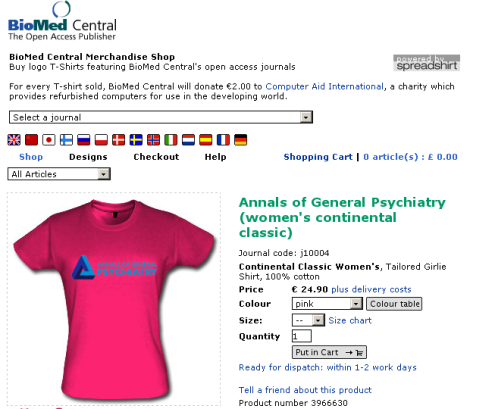 With a new child, people are always asking if the baby looks like the father or the mother – probably a prehistoric social reflex to confirm that this is your offspring that you are caring about.
Face recognition clearly is a science of its own – a lot of heuristics and Bayesian computing – more at face-rec.org – and even a big business if you think of automatic passport control or age determination for goods that are only allowed for adults.
Face recognition works quite robust as I found in the advanced online demo at betaface.com. A new browser plugin from polar rose will even allows to annotate web pictures – Orwell meets Flickr.

Three German universities that have been elected into an excellence cluster. This oracle isnÂ´t too bad for me ;-) as I have been raised close to the first and teached at both other universities.
Yes, I agree, there are some differences but – as science is done mainly by individuals or at least local teams – the differences are not so large and this election (for whatever criteria) doesn’t have so much meaning.
I believe, however, there will be some self-fulfilling prophecy, as on the longterm run these Universities will attract more excellent people – a point being missed in the current discussion. Yea, yea.

Just read the entry of Janet D. Stemwedel about the 2007 North Carolina Science Blogging Conference, a “free, open and public event for scientists, educators, students, journalists, bloggers and anyone interested in discussing science communication, education and literacy on the Web.” Do not miss her tag “Shameless self-promotion” ;-) Three editors from The Lancet will take up to 49 registrants. Who can give me a free ride from Munich (bonus miles welcome)?