“In the case of religion, we put our faith in gods. And in nutrition, we have vitamins,” writes journalist Catherine Price in Vitamania, in which she traces vitamin crazes from the 1920s to the present.

Harvard Magazine reports about a new cancer vitamin D study. It includes more than 1,000 patients with metastatic colorectal cancer but going into the details it is a phase 3 clinical trial of chemotherapy and NOT a clinical trial of vitamin D. Vitamin D serum levels are used for posthoc stratification only although we know that these kind of studies are always misleading.  At least HM quotes VITAL research Manson with

I wish the VDAART chairs at  Brigham and Women’s Hospital would have a similar realistic assessment. Their results are overdue with June 2014 ending of data collection for the primary outcome. Is it just the simple fact that vitamin D is not a wonder pill?

Related posts: The first proven risk factor for allergy | Reference values should be based on reference populations and not on politics | A large inter-individual variation for the efficiency of vitamin D3 supplementation | Why the allergy epidemic did not already start 1935 in Germany | (1S,3Z)-3-[(2E)-2-[(1R,3aR,7aR)-7a-methyl-1-[(2R)-6-methylheptan-2-yl]-2,3,3a,5,6,7-hexahydro-1H-inden-4-ylidene]ethylidene]-4-methylidene-cyclohexan-1-ol |

It is a long time period from our first paper in July 1999 in Allergy, but more than 15 years later there is now a huge list of papers. 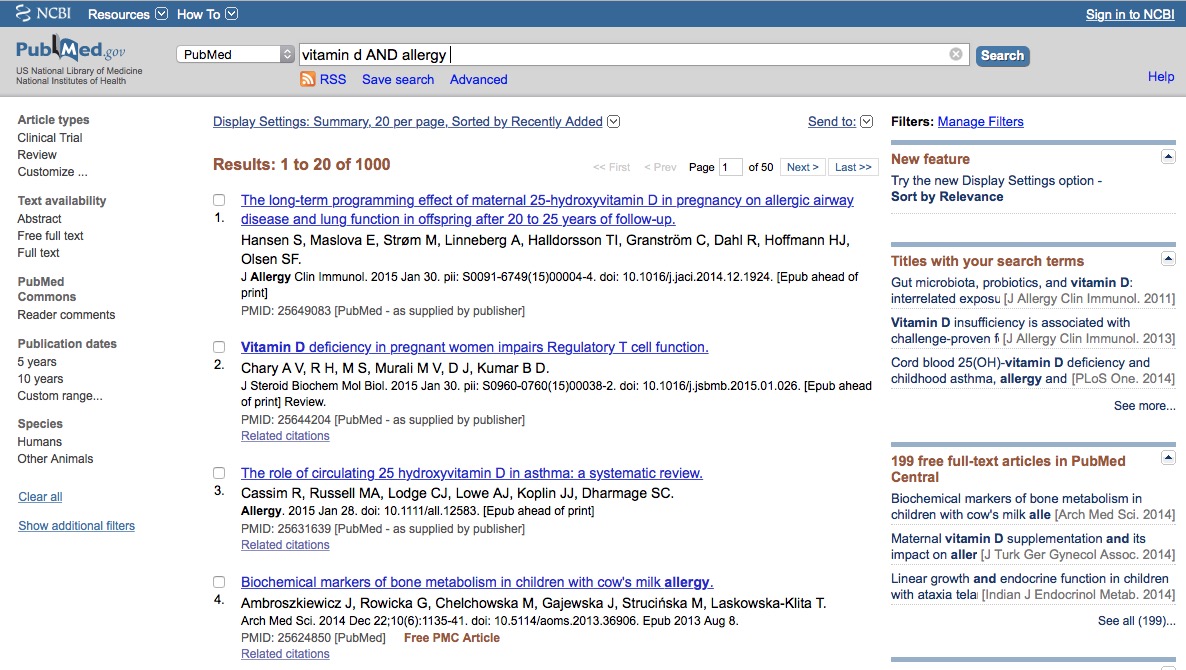 When looking for potential paradigm shift in research, however, vitamin D is still largely ignored.

Related posts: The 5 most important papers on vitamin D and respiratory infections in asthma | CD 14 now also on the vitamin+allergy list | Another path from vitamin D to allergy | Hans Selye: Ancestor of the allergy vitamin hypothesis | Dual vitamin D effects on type 1 diabetes and allergy |

The integration of all these genome-wide data facilitates the identification of the most important VDR binding sites and associated primary 1,25(OH)2D3 target genes. Expression changes of these key genes can serve as biomarkers for the actions of vitamin D3 and its metabolites in different tissues and cell types of human individuals. Analysis of primary tissues obtained from vitamin D3 intervention studies using such markers indicated a large inter-individual variation for the efficiency of vitamin D3 supplementation.

It is a continuous medical malpractice to supplement newborn children with vitamin D without taking into account variation of the inter-individual response, body weight, or any co-medication.

Vitamin D level is an activity or lifestyle marker, although this has been largely neglected in the medical literature, maybe except Gannage 2000, Hyppönen 2007, Sohl 2013 and Choi 213. A new paper by de Rui in PLoS now shows that

While these are good news for older cyclists END_OF_DOCUMENT_TOKEN_TO_BE_REPLACED

I have been told long ago to take care of the last sentence in a paper, avoiding any unjustified conclusion or any unwarranted speculation. Let’s start with a fully justified last sentence in the new volume of  “International Nutrition: Achieving Millennium Goals and Beyond”

For a long time this has been a general rule. Just take the mean and substract two standard deviations and you get some useful reference values. Or whatever algorithm you like. This changed considerably where commercial or any other personal interests come into play. The cholesterin discussion settled only by studies showing that people with a history of cardiovascular disease may derive benefit from statins irrespective of their cholesterol levels.
I see some analogy in the vitamin D field. There is a German dermatologist who believes that 60% of all Germans are vitamin D deficient (the comments following the interview highlight this as an epiphany “totale Erleuchtung”). And a more recent paper showed that “89.9%” of all healthy newborns being insufficient. Really looks like a mix-up of some basic concepts in clinical medicine, yea, yea.

After more than a century of research, the first successful clinical trial of an allergy risk factor has been performed. It looks like the authors even did not anticipate such an effect (known as triple blind design). But read what the Pubmed article about the Norizoe et al. paper says

To elucidate whether maternal vitamin D supplementation during lactation improves infantile eczema and other subsequent allergic disorders, a randomized, double-blind, placebo-controlled trial was performed.
Mothers (n=164) of infants with facial eczema at one-month checkup were randomly assigned to receive vitamin D3 supplements (n=82; 800 IU/day) or placebo (n=82) for 6 weeks from May 2009 to January 2011. The primary outcome was infantile eczema quantified by Scoring Atopic Dermatitis (SCORAD) index at the three-month checkup, and the secondary outcomes were atopic dermatitis, food allergy, and wheeze diagnosed by doctors up to 2 years of age.
There was no significant difference in SCORAD at 3-month checkup between two comparative groups. Doctor-diagnosed food allergy was significantly more common up to age 2 years in vitamin D group (10/39: 25.7%) than in placebo group (3/40: 7.5%; RR=3.42, 95%CI=1.02 to 11.77, P=0.030). Moreover, at least one secondary outcome was also significantly more common in vitamin D group (17/39: 43.6%) than in placebo group (7/40: 17.5%; RR=2.49, 95%CI=1.16 to 5.34, P=0.012).
These results suggest that vitamin D supplementation may not decrease the severity of infantile eczema at three months of age, but may rather increase the risk of later food allergy up to two years of age. Because a large number of subjects was lost to follow-up, further study is needed to confirm the findings.

Of course, there may be some weakness in the study design, a large loss to follow-up and the way how food allergy was diagnosed will be critized. I think, however, that this is a major breakthrough that raises the hope that we will finally understand how allergy develops.

I should have added “true” risk factor, as there are positive trials on probiotics and atopic dermatitis. The meta-analysis by Lee immediately lead to a rebuttal

Their review fails to meet published standards for the quality of systematic reviews on several criteria, and this has led to inappropriate conclusions. […] These defects in methodologic rigor have led to an exaggeration of the clinical benefits of probiotics for eczema prevention.

The Cochrane Summaries are also negativ

There is not enough evidence to recommend using probiotics for the treatment of eczema.

Related posts: A factor in hay prevents vitamin D action | CD 14 now also on the vitamin+allergy list | Vitamin A and allergy | Close the calcium channel to get rid of allergy? | Does my partner cause my allergy? |

Welcome to the third major symposium on vitamin D and asthma at the AAAAI. END_OF_DOCUMENT_TOKEN_TO_BE_REPLACED

It stirred already the vitamin D community, the new dietary reference intakes with comments at newspapers and blogs. But read yourself all 999 pages ;-) END_OF_DOCUMENT_TOKEN_TO_BE_REPLACED

The fact that the regulation of intracellular Ca2+ concentration is different in various T-cell effectors may offer the opportunity to target key intermediates … to inhibit specifically the functions of one given T-cell subset. END_OF_DOCUMENT_TOKEN_TO_BE_REPLACED

Related posts: Close the calcium channel to get rid of allergy? | Tolerogenic effects of vitamin D? | Another challenge of the hygiene hypothesis | Three unwise monkeys | Vitamin D as an adjuvans to specific immunotherapy |

Perinatal data for singleton children who were prescribed anti-asthmatic medication (n = 61 256) were compared with corresponding data for all singleton children born in Sweden … (n = 1 338 319). … Being the first-born child, maternal age above 44 yr, involuntary childlessness for more than 1 yr, maternal smoking during pregnancy, maternal diabetes mellitus of any kind, pre-eclampsia, caesarean section, and instrumental vaginal delivery were all associated with an increased prescription of anti-asthmatic medication during childhood. END_OF_DOCUMENT_TOKEN_TO_BE_REPLACED

Hopefully the auto-loader at the bottom will pick some previous posts here about calcium, vitamin D and allergy; these may be necessary for the background of a new study published in the American Journal of Respiratory and Critical Care Medicine last week

We looked for Cav1 channel expression in Th2 and Th1-cells by real-time PCR and Western blotting. We sequenced the isoforms expressed by Th2-cells and tested whether Cav1 antisense oligodeoxynucleotides (Cav1AS) affected Ca2+ signaling and cytokine production […] mouse Th2 but not Th1-cells expressed Cav1.2 and Cav1.3 channels. Th2-cells transfected with Cav1AS had impaired Ca2+ signaling and cytokine production, and lost their ability to induce airway inflammation upon adoptive transfer.

This highlights again the close connection of the calcium system to immunology. While the earlier TRPM4 story was basically about mast cells, we now arrived at Th2 cells, yea, yea.

I don’t know, if the last statement is really warranted but – as written 5 years ago – there is a super tight connection of calcium and vitamin D to allergy.

This week the journal “Allergy” printed a report of three cases where allergic sensitization in preterm infants is attributed to the human milk fortifier Similac.

Not listed above but in the Products Guide are 120 IU/100 ml D3 which may indeed function as a sensitizer.