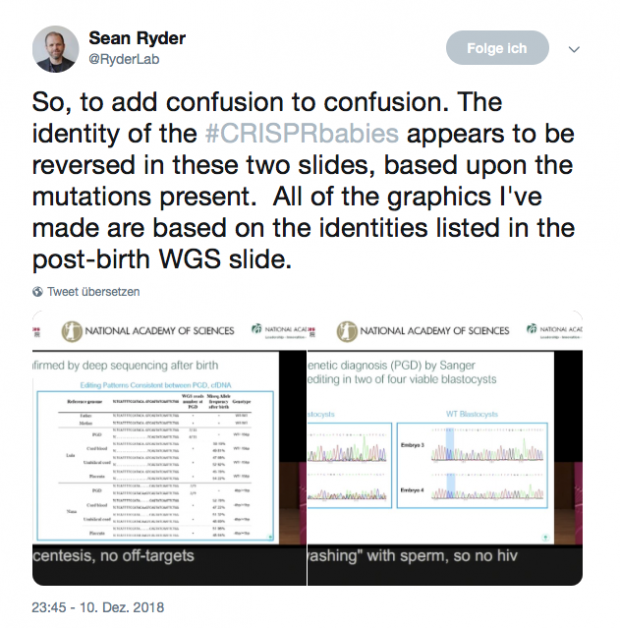 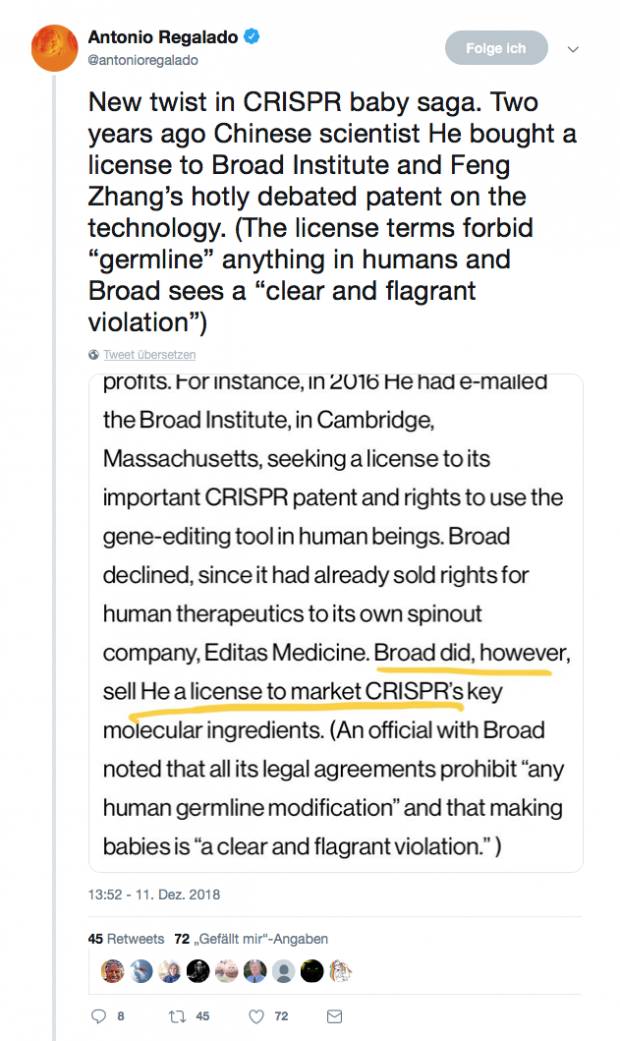 Was so alles noch möglich ist.

Scenarios illustrating governance gaps in in the report include: – A reckless CRISPR user who develops and markets a probiotic created with genome editing that has serious unanticipated effects for consumers; – An agricultural biotechnology firm conducting dual use genome editing research that lies outside current oversight, but nonetheless could have negative consequences for human health – An intentional release of a gene drive organism from a lab, that while having limited physical harm, feeds a state-based misinformation campaign with large economic impacts – An accidental release of a gene drive organism due to lack of awareness and uncertainty about the risk classifications and protocols for handling new technologies – A terrorist group using commercial firms that lack strong customer and order screening to use genome editing to weaponize a nonpathogenic bacteria – A state-sponsored program to develop biological weapons for new strategic uses, including covert assassination, using largely publicly available research

HIV research halted after NIH freezes acquisition of fetal tissue. Researchers at the National Institutes of Health have been ordered not to acquire new fetal tissue for their research since September, according to Science — the same month the Trump administration began an audit of research using the tissue funded by the NIH and other agencies. The NIH confirmed the suspension on Friday to Science, which reported it affected two NIH labs, including halting an HIV research project.

Last week, Harvard researchers announced that they plan to edit the DNA of human sperm to see if it’s possible to create IVF babies with lower risks of developing Alzheimer’s later in life.

Science with a small “s” is a human enterprise as old as humanity itself. Nibbling on that tasty-looking mushroom and waiting a few hours to see if you get sick? That’s hypothesis testing. Try it a few more times with successively bigger bites, maybe add a bit of open-fire cooking; you’ve got a scientific method going. He’s human experiment is clearly science in this sense. Whether it will become Science with a big “S” remains to be seen. This more rigorous meaning of Science—which seeks to accrue knowledge by progressively, and systematically, reducing uncertainty—has only been around a few hundred years. Its arrival was marked by the development of the scientific paper, published in the pages of peer-reviewed journals.

Winners of this year’s Nobel prize for chemistry say overblown fears about genetically modified foods risk preventing society benefiting from the technology. Prof Frances Arnold, from the US, and Sir Gregory Winter, from Britain, made the comments on Friday ahead of Monday’s presentation of the prize.

I study the prediction of complex diseases and human traits that result from interactions between multiple genes and lifestyle factors. This research shows that geneticists cannot read the genetic code and know who will be above average in intelligence and athleticism. Such traits and diseases that result from multiple genes and lifestyle factors cannot be predicted using just DNA, and cannot be designed. Not now. And very unlikely ever.

Scientists hypothesize that the mutation gave some sort of advantage to people against the epidemic. This gave these individuals an increased chance of survival and ability to reproduce and pass on the affected allele. Evidence dating the mutation back 700 years ago coincides perfectly with the Black Death. According to this idea, the Black Death drove natural selection in the human population.